With Damar Hamlin situation in mind, how decision on Bills-Bengals game affects NFL 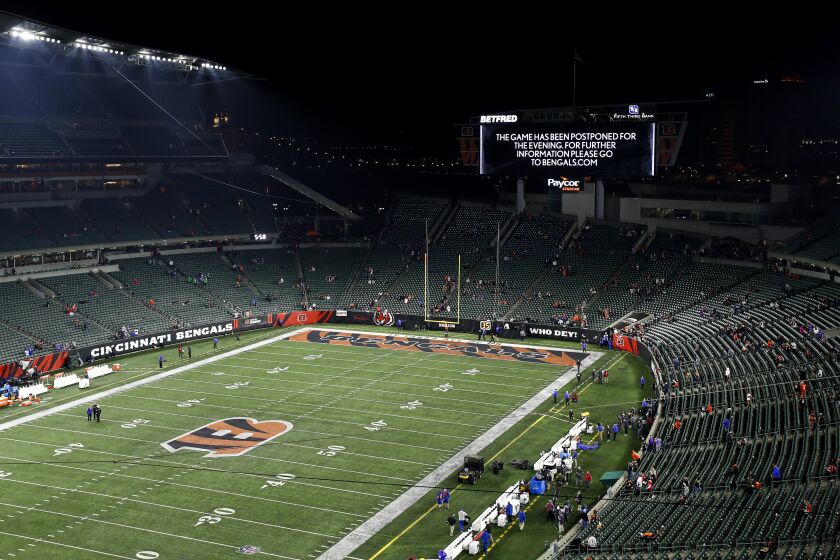 NFL teams resumed practicing Wednesday with the hospitalized Damar Hamlin on their minds and hearts, yet with Week 18 opponents on their schedule.

It’s an incredibly delicate time in the league, with the Buffalo Bills safety Hamlin still in critical condition after suffering cardiac arrest in a Monday night game, and the NFL trying to decide how it will move forward with the postseason that’s fast approaching.

So far, the league has only said that it will not finish the suspended Buffalo-Cincinnati game this weekend, and that the original Week 18 slate of games is intact.

“All of the focus has been on Damar,” Troy Vincent, NFL executive vice president of football operations, said Wednesday on a conference call with reporters. “We have just begun to think through and talk through all of the different scenarios, where that game stands, whether to play it and so on.”

Were Bills-Bengals a matchup between teams not headed for the playoffs, it would be easier to discard. But both entered that game with a chance at the No. 1 seed in the AFC, which comes with a week off to start the tournament. So that’s a highly coveted reward, those teams have been focused on all season.

What the NFL decides to do with that game — suspended with 5 minutes, 58 seconds remaining in the first quarter and Cincinnati leading, 7-3 — will have a reverberating effect throughout the conference.

The decision ultimately falls to commissioner Roger Goodell, and it’s likely he will make some sort of definitive announcement by the end of this week about whether Bills-Bengals will be completed. Although the league hasn’t said this, it needs to clarify what it’s going to do so teams playing this weekend know exactly what’s at stake.

Goodell could decide to nullify the Bills-Bengals game or effectively do so by calling it a tie. That would mean Buffalo and Cincinnati would finish with 16 games, while the rest of the league played 17. Perhaps the league could determine seeding by winning percentage, a plan that was put in place (though never used) during the pandemic season.

That would be bad news for the Bengals, though, because it would take them out of the running for the No. 1 seed. Meanwhile, the Bills would surrender the inside track on the top seed to Kansas City. If no winner were determined between the Bills and Bengals, the Chiefs would lock up the No. 1 seed with a win at Las Vegas or a Buffalo loss to New England.

“We know whatever scenario we have to play to try to win the football game,” Chiefs coach Andy Reid said. “That’s what we have to do. That’s what we’re going to do. And the players have worked through practice and done a nice job with it up to this point.”

If no winner were determined between Buffalo and Cincinnati, Baltimore would be on track for the No. 6 seed in the AFC whether it beats the Bengals on Sunday or not. Had the Bengals lost to the Bills on Monday night, the Ravens could have won the AFC North with a season-ending win at Cincinnati.

There is a caveat: If the Chargers were to lose at Denver and the Ravens beat the Bengals, Baltimore would be the No. 5 seeds. That means something, because it would be the difference between the No. 5 playing at the winner of the AFC South — determined Saturday when Tennessee plays at Jacksonville — or the No. 6 traveling to Cincinnati or Buffalo.

Still, nullifying the Bills-Bengals might be the path of least resistance for the NFL.

There is an extra week built into the postseason schedule, between the conference championship games and the Super Bowl. In extreme circumstances the league has done away with that in order to fit in games that had to be rescheduled. That was the case during the 9/11 season in 2001.

Goodell could eliminate that cushion and tack an extra week onto the regular season solely for the completion of Bills-Bengals. It’s highly unlikely, however, that the league would set aside a weekend for three quarters of a game that might or might not have a significant impact on the AFC pecking order. Not only that, but the NFL would also put at center stage that matchup on that same field — rekindling that nightmarish memory from Monday night.

There are all sorts of other scenarios involving coin flips and adding bye weeks, and other manipulations, but the most likely scenario involves treating Bills-Bengals as a tie and moving forward. It’s not perfect, but a tidy solution might not exist.