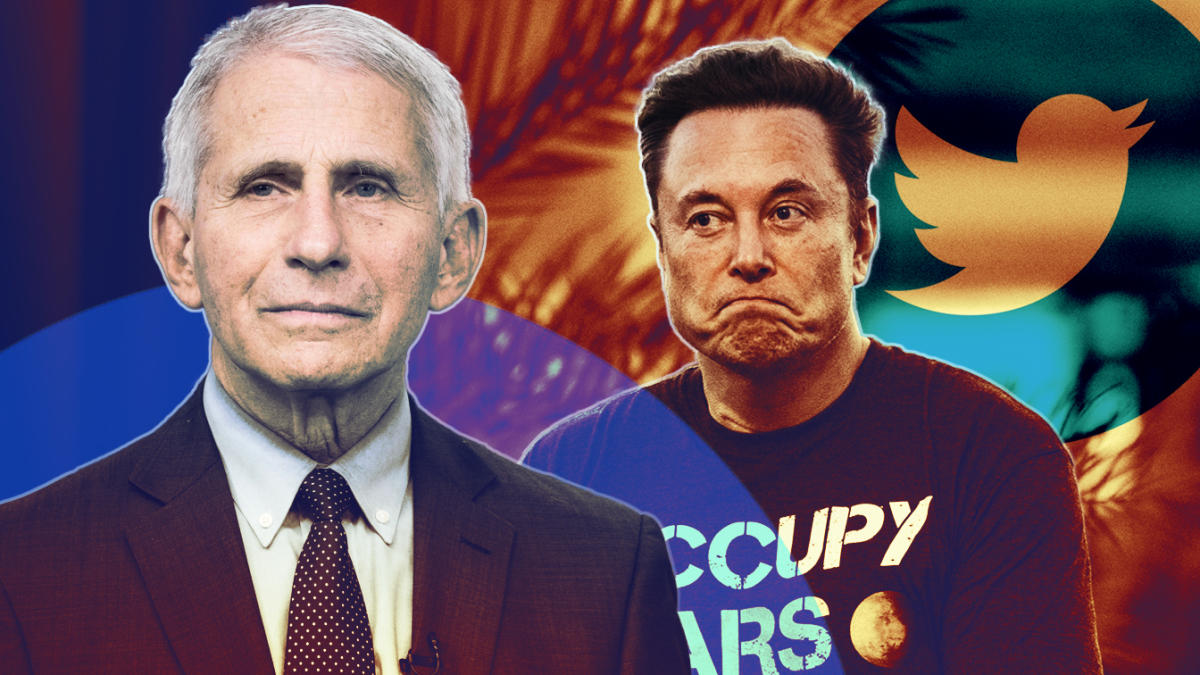 WASHINGTON — Dr. Anthony Fauci may be on the cusp of retirement, but that has hardly made the president’s top medical adviser immune to political attacks from opponents who hold him responsible for various shortcomings, whether real or perceived, in how the nation handled the coronavirus pandemic.

His most recent critic is Twitter owner Elon Musk, one of the world’s richest men, who trained his 121 million followers on the 81-year-old outgoing director of the National Institute of Allergy and Infectious Diseases with a series of messages in recent days.

“My pronouns are Prosecute/Fauci,” Musk tweeted on Sunday, using a popular right-wing meme to mock transgender and nonbinary people. Since taking over the platform in late October, the Tesla founder has made the platform more overtly political, engaging in the kind of hard-edged discourse that makes the site unpalatable for some users and advertisers.

The White House condemned Musk’s attacks on Fauci during a briefing on Monday afternoon. “They are disgusting and they are divorced from reality,” press secretary Karine Jean-Pierre told Yahoo News, adding that attacks on public health officials — which have hardly been confined to Fauci, even if he has been the most prominent target — were ” incredibly dangerous.”

Fauci has served every president since Ronald Reagan and has treated every major infectious disease outbreak since the 1980s. Jean-Pierre praised Fauci as an “exceptional talent” who had “saved countless lives,” including by listening to, and working with, AIDS activists who were pushing for faster drug trials at a time when an HIV diagnosis amounted to a death sentence. Later, he personally treated Ebola patients.

But it is Fauci’s work for the administrations of Donald Trump and Joe Biden that has made him an acutely controversial figure in American public life.

Although he served only in an advisory capacity to both — and was eventually sidelined by Trump — Fauci has become a symbol of virtually everything frightening and frustrating about COVID-19, including the very advent of the pandemic itself.

In another meme that Musk shared, Fauci is seen advising Biden to impose “one more” lockdown. But, in fact, it was under Trump, not Biden, that the most onerous lockdowns took place, largely because the coronavirus was new in 2020 and little was known about how it spread. By the time Biden became president in 2021, lockdowns had largely become politically toxic — and, thanks to the arrival of effective vaccines, unnecessary.

Since taking over Twitter, Musk has become an increasingly political — and polarizing — figure. On Sunday night he was booed at a San Francisco performance by comedian Dave Chappelle, who is no stranger to controversy himself.

Elected officials in Washington who had eyed Musk’s takeover warily saw the anti-Fauci tweets as yet more evidence that he would be an unpredictable custodian of a platform beloved by political and media elites.

“Courting vaccine-deniers doesn’t seem like a smart business strategy, but the issue is this: could you just leave a good man alone in your seemingly endless quest for attention?” wrote Sen. Amy Klobuchar on — naturally enough — Twitter.

Musk ended Twitter’s policy against the proliferation of coronavirus misinformation late last month, in apparent keeping with his desire to make the platform adhere more closely to his principles of unfettered free speech.

He has also released a series of internal documents related to some of the most contentious decisions Twitter has made in recent years, including the banishment of Trump and the suppression of a New York Post article on the contents of Hunter Biden’s laptop.

Fauci was well known to disagree with Bhattacharya and others who sought a fuller, quicker reopening, and he has openly lamented the spread of misinformation online. But he had no power to influence the decisions of behemoth corporations — or of local governments that often moved at their own pace, out of step with whatever the federal government was recommending at the time.

All that may mean little to Musk, who has made a habit of courting fringe or discredited ideas. After a man attacked House Speaker Nancy Pelosi’s husband in San Francisco, Musk spread a purely fictitious report that the attack had, in fact, been a lovers’ quarrel between the attacker and Pelosi’s husband.

The coronavirus, of course, spawned an entire cottage industry of conspiracy theories — with Fauci near the center of many of them. That has made him the target of extremists, including one who was planning to travel to Washington to kill him and others.

“It’s so outlandish, it almost borders on ludicrous,” Fauci told a BBC podcast last week when asked about the attacks against him. “As far as my own safety, I don’t let that bother me,” he said, but he denounced attacks on his wife and daughters as “cowardly.”

Some far-right personalities like Rep. Marjorie Taylor Greene, R-Ga., has long called for the prosecution or firing of Fauci, but the grounds for such action are unclear at best. Some of his critics believe he knows more than he has said publicly about so-called gain-of-function research that was conducted at the Wuhan Institute of Virology and may have caused the initial SARS-CoV-2 outbreak in the central Chinese city.

Although the possibility of the coronavirus having emerged from a laboratory remains a credible — albeit disputed — hypothesis, there is no reason to believe that Fauci would have been aware of such an accident, or that he would have endorsed the kinds of practices that would allow such an accident to occur.

Fauci “lied to Congress and funded gain-of-function research that killed millions of people,” Musk wrote in response to his initial anti-Fauci post.

Fauci has openly testified about the need to work with laboratories in China, since many diseases emerge there. And while gain-of-function research is indeed controversial, some believe that only by boosting a virus can its potential evolution be truly understood.

Opponents of masks and vaccines — and Fauci is a symbol of both — responded to Musk’s messages with enthusiasm. One conservative critic of Fauci and associated public health experts, Dr. Eli David, shared a meme based on actor Will Smith’s notorious slap of comedian Chris Rock at the Academy Awards — only in his version it was Musk gleefully hitting Fauci.

Musk is a supporter of Florida Gov. Ron DeSantis, who opposed almost all restrictions, including masks, lockdowns and vaccines. He was praised for keeping his state open, but 83,200 people died there. Critics have accused him and other conservative leaders of not taking the pandemic seriously enough.

Earlier this year, DeSantis derided Fauci as “a little elf,” urging his supporters to “chuck him across the Potomac.”

Even if prosecution remains an outlandish possibility, Republicans could well call Fauci to testify when they take over the House in January, especially if they are prodded to do so by high-profile figures like Musk. Fauci has said he will cooperate with congressional requests.

“If I become a punching bag, I’m a punching bag,” he said in an interview last week. “But I am very happy to testify before any congressional oversight committee, I have nothing to hide. I can explain and validate everything that I’ve done.”

Musk appeared to enjoy the controversy that his anti-Fauci tweets caused. Once again resorting to a meme that would have been largely unknown outside the far-right media ecosystem, he likened his detractors to the infamous Branch Davidian religious cult, which was based in Waco, Texas, before federal agents stormed its compound in 1993.