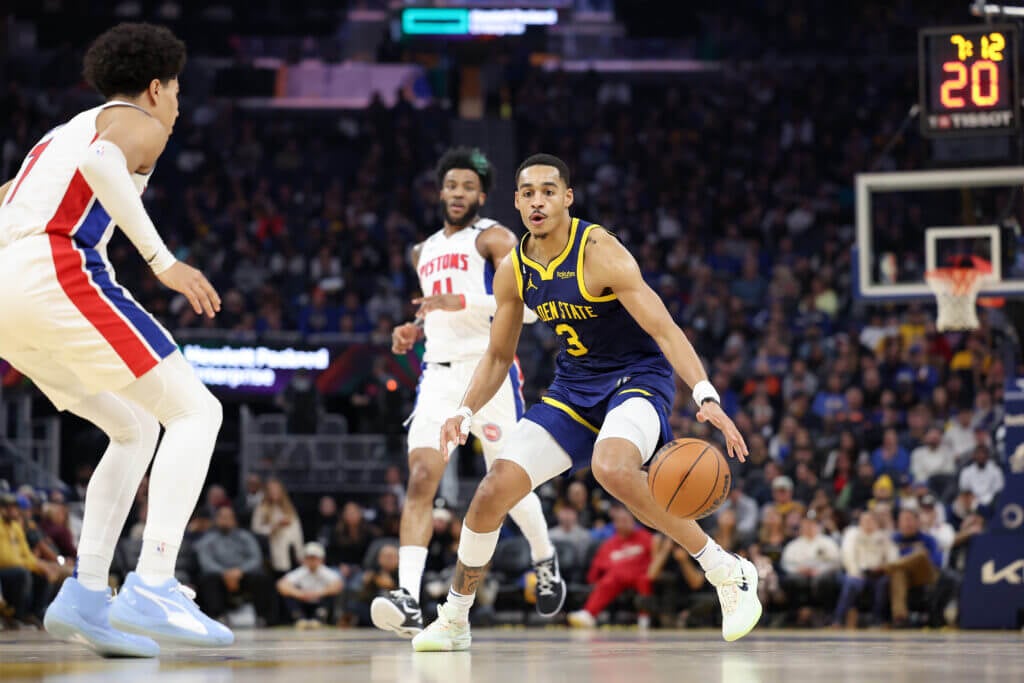 SAN FRANCISCO — Three games ago, Jordan Poole had the bigger, slower Drew Eubanks on a switch near the top of the key with 55 seconds left and the Warriors leading the Blazers by three points.

Poole, eager to attack the mismatch with his speed and elusiveness, attempted an oddly angled right-to-left behind-the-back dribble, flowing into a left-handed drive. But he started moving to the rim before he’d completed the dribble. The ball whipped out of his hands and went out of bounds. A courtside fan caught Steph Curry‘s reaction to the ill-timed mistake. It was Poole’s seventh turnover of the night and kept Portland in it.

😭😭😭😭😭 yo steph was mad as hell over jordan’s turnover pic.twitter.com/OrXbsPCQ2r

Two games ago, Poole pushed it into the frontcourt with 15 seconds left in regulation and the Warriors trailing the Hawks by one. He saw a backpedaling Bogdan Bogdanović and decided to attack him on the drive. But another frantic left-to-right dribble move ended poorly.

Poole tried a crossover as he went into Bogdanović’s body. The slight bump knocked him off balance. It wasn’t enough to draw a whistle. The ball flew off his knee out of bounds. It was the most consequential of his six turnovers, giving Atlanta back possession with 12 seconds left and a one-point lead.

Wednesday night against the Pistons, for a third consecutive game, Poole had the ball in his hands in the final minute of a tight game. For a third straight game, he turned it over on a rushed dribble move.

This one came against the exploitable Alec Burks in a switch situation. The Warriors, down one with 15 seconds left, cleared some space for him to try with plenty of time left on the shot clock. He tried to hit Burks with a slow-to-fast, right-to-left crossover, but the move was rushed again. He tripped during his change of pace and direction. The ball bounced right to Killian Hayes for another crucial turnover.

They all might’ve looked similar, but there was a major difference between the third Poole turnover and the first two. The Warriors went on to beat the Blazers and Hawks. They fell to the league-worst Pistons on Wednesday night, 122-119, snapping a five-game winning streak that could’ve stretched to six.

Late-game mistakes are put under a bigger microscope externally and absorbed with harsher emotions internally when they happen in a loss. It didn’t ultimately cost them against Portland and Atlanta. It did against Detroit. It wasn’t the only late-game mistake — Draymond Green was ejected (controversially) and the Warriors’ defense lost Saddiq Bey for a buzzer-beater — but it was the extension of a bigger picture trend that finally bit Poole and the Warriors.

Poole took it hard. You could see it in the moments after the turnover as he sunk to the court in disbelief and later as he sat at his locker quieter than normal. Klay Thompsonscorching down the stretch, had ceded control of that possession, turning down a switch attack of Isaiah Stewart to let Poole go at Burks.

“I told him in the locker room there’s a reason I threw him the ball,” Thompson said. “Because he likes that.” He’s a clutch player. He’s a shot creator. We would not have been on this winning streak without him. I know that. I mean, shoot, we all go through those lapses early in our career. I remember missing two free throws against the Nuggets in my second year and just leaving the arena in my uniform. So, it’s like, we all got to go through it. Steph (Curry) went through it. Jordan, we’re going to continue to trust him with the ball in his hands because he’s an engine that makes us go.”

The Warriors are 5-1 on this homestand and 6-4 since Curry went down with a shoulder injury. That’s more than adequate, keeping them afloat long enough to deliver a competitive situation back to Curry, who appears to be targeting a return to open the upcoming road trip on Jan. 13 against San Antonio.

Poole has been a major part of all six of those wins without Curry. He scored 43 points on 14 of 23 during a masterpiece performance in Toronto. He had 32 points in three quarters in Memphis before an ejection, helping build a lead the Warriors would hold. He had 24 against the Hornets26 against the Jazz41 against the Blazers and 28 against the Hawks.

It hasn’t all been clean and efficient. He needed 31 shots for his 28 points against Atlanta. He has 49 turnovers in the 10 games since Curry left the lineup. He can get a bit scattered and sloppy when he forces the issue and — placed in the primary creation role without Curry or Andrew Wiggins — he must force the issue for large chunks of the game or the Warriors won’t be able to generate enough points.

It’s why Steve Kerr quickly redirected a question about Poole’s late turnover problem into a larger appreciation for what Poole is doing with a level of offensive responsibility he’s never had for this extended period.

“He’s also hitting huge shots,” Kerr said. “He hit two big jumpers down the stretch. Jordan’s made so many big plays for us and helped us win so many games. What’s great is that everything is a learning experience for him at this stage of his career. He’s getting a lot of late-game experience. He made the one mistake, but he made two big shots right before that and I thought really played well and played hard all game.”

But that doesn’t make it sting any less. Poole has a burning desire to be great, showed up in big moments during the playoffs and was rewarded with a four-year, $123 million extension this summer that’ll kick in next season. He is putting immense pressure on himself to live up to it. Thompson, who mentioned that time he stewed after screwing up against the Nuggets, said younger players always take it harder. Career perspective still hasn’t landed.

“Yes,” Thompson said. “Because you want to be so great every night. You have high expectations of yourself. I know Jordan does. And until, as well. You just expect to be great. It’s unrealistic to be great every game. But you still want to be your best. It never feels great when you go home after a game when you feel like you could have done this differently or handled it this way. But that’s part of being an athlete, handling the ups and downs and embracing the journey.”

This will profile as a bad loss for the Warriors. Detroit only has 11 wins and two of them have come against Golden State. But they’ve survived enough clutch moments on this homestand that it isn’t debilitating. They’re 20-19, tied with the Suns for eighth in the West and only one game out of the fifth spot. Wiggins could be back as early as Saturday against the Magic. Curry could be back late next week.

It’s part of why they were emanating an optimistic tone postgame and backing Poole.

“I was just telling the guys how proud I am of them for holding down the fort these last couple of weeks,” Kerr said. “Tonight was tough, but given the state of our roster for us to win five of these first six home games on this stretch and have all these guys fighting, scrapping and clawing night after night, it’s been really impressive and it’s put us in a great position going forward. We’ve got reinforcements coming. So it was a tough tough loss, but like I said, I’m more than anything, I’m just proud of the entire group.”