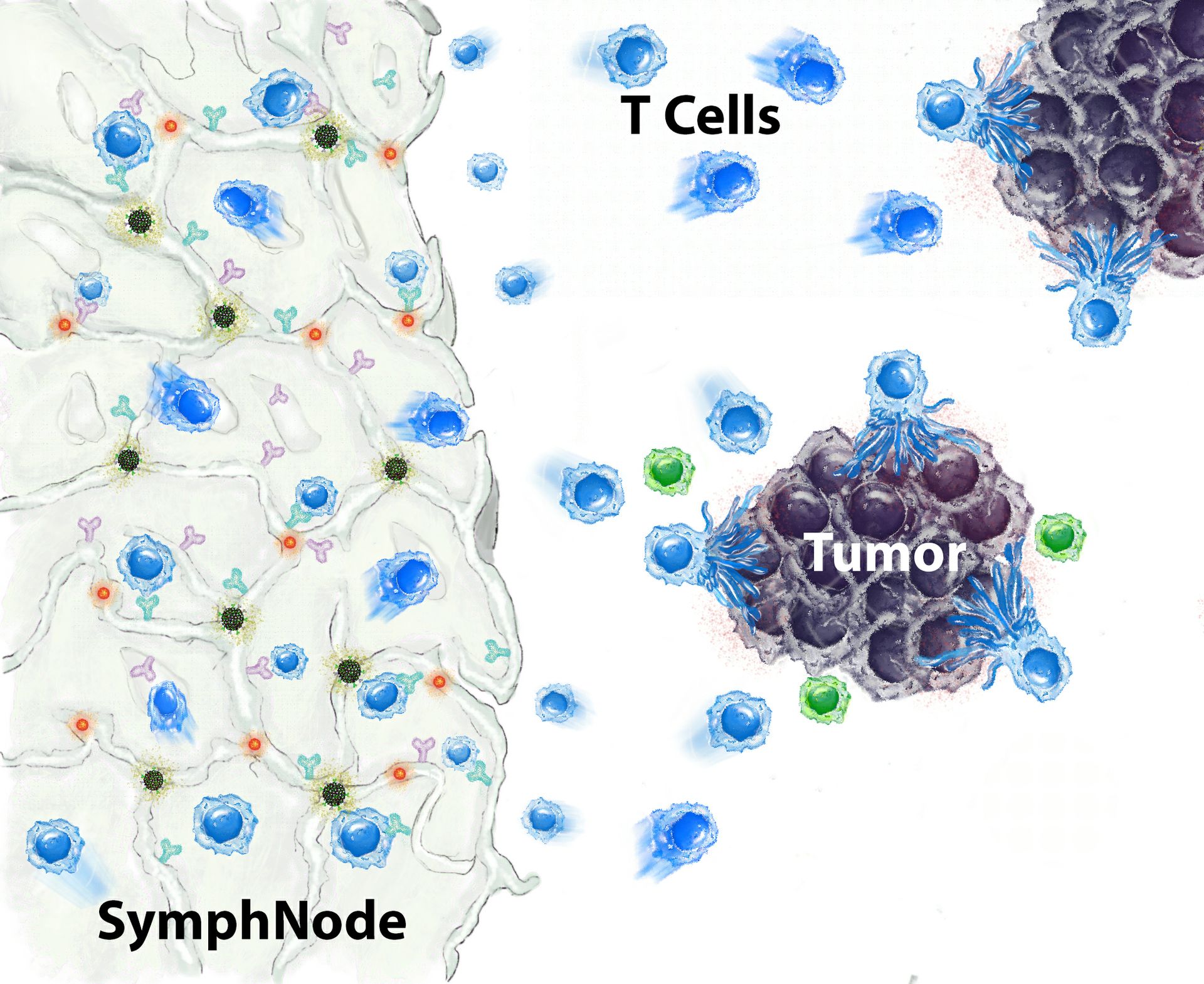 Many solid tumors resist treatment in part by turning human biology against itself. Tumors surround themselves with extra white blood cells known as regulatory T cells, which call off the body’s natural defenses against the disease.

Strategies to treat cancer by deactivating these cells risk creating other serious problems. Since regulatory T cells play an important role in safeguarding healthy tissues, diminishing them throughout the body can lead to other immune cells mistakenly attacking these tissues and causing autoimmune conditions that damage the colon, liver, heart and other organs.

Now, an interdisciplinary UCLA research team reports encouraging results in laboratory studies testing a tiny implantable device they call a SymphNode, which is designed to keep regulatory T cells in check only in the area around a tumor while summoning and strengthening tumor-fighting cells. The device was shown to drive tumors into remission, eliminate metastasis, prevent the growth of new tumors and result in longer survival in mice.

Their findings are published Jan. 4 in Nature Biomedical Engineering.

“Getting rid of regulatory T cells within the tumor seems to be transformative,” said co-corresponding author Manish Butte, UCLA’s E. Richard Stiehm Professor of Pediatric Allergy, Immunology and Rheumatology and a member of the California NanoSystems Institute at UCLA. “Every solid tumor is crammed with these cells, and they’re why 91 percent of cancer deaths occur from solid tumors. They’re probably limiting our ability to cure the cancer in the first place.”

The SymphNode is a tiny biodegradable sponge about the size of a pencil eraser that is made from alginate, the same jiggly polymer used to thicken pudding. When surgically implanted directly next to a tumor, the sponge stimulates the body’s immune response against cancer in multiple ways: It slowly releases a drug that blocks the regulatory T cells in the tumor. At the same time, it attracts and beefs up the T cells that kill tumors. The material that the device is made of resembles a lymph node, a welcoming setting for cancer-fighting cells, and has pores lined with antibodies that further activate those cells.

The researchers tested the SymphNode in mouse models of both breast cancer and melanoma. With breast cancer, the device shrank tumors in 80 percent of mice and prevented the spread of cancer in 100 percent of them. In contrast, the cancer metastasized to the brains and lymph nodes of all mice in an untreated control group and killed all these mice within a few weeks. The researchers also found that placing a SymphNode next to one breast cancer tumor halted the growth of a second, simultaneous tumor at a different location in the body.

In melanoma, the device shrank tumors in 100 percent of treated mice, with tumors decreasing to undetectable levels in more than 40 percent of cases. In both types of cancer, the treatment significantly extended the life span of mice, in many cases by more than twice that of untreated mice.

Most promising, the researchers demonstrated mice whose breast cancer was treated with a SymphNode and survived also resisted the growth of a second tumor injected 100 days after the first, indicating that the technology may decrease the risk of cancer returning. Butte, who is also a member of UCLA’s Jonsson Comprehensive Cancer Center, said this resulted from the activity of memory T cells — immune cells “trained” by fighting the original tumor to quickly recognize and combat the same cancer if it comes back at a later time. He added that he believes there are few, if any, cancer therapies currently on the market that seem to similarly enhance memory T cells and keep tumors from coming back.

The team aims to make SymphNode available to treat human cancers in the future by licensing the technology to Symphony Biosciences, a company based at the California NanoSystems Institute’s Magnify startup incubator on the UCLA campus. UCLA alumna Negin Majedi, Symphony’s co-founder and CEO, and Mahdi Hasani, the company’s chief scientific officer and a UCLA project scientist, are inventors of the SymphNode and co-first authors of the current research. Majedi performed her doctoral research work in Butte’s group.

Symphony is currently developing a smaller, injectable version of the SymphNode, which the team envisions as a potential addition to chemotherapy or other first-step treatments for a variety of cancers. The company hopes to initially apply the technology to triple-negative breast cancer, an aggressive form of the disease that lacks targeted therapies. Majedi estimates clinical trials could launch sometime in 2024.

“Symphony is how we hope to make our research a reality for patients,” she said. “Without this company, our data would remain simply as print on paper.”

According to Hasani, the type of interdisciplinary research needed to create the SymphNode could only happen at a place like UCLA.

“We have a medical school close to an engineering school,” he said. “In the middle, we have the CNSI, with its core facilities and an incubator space for startup companies. With a setup like that, we can bring together the best of many worlds.”

Other co-authors of the study are Timothy Thauland, a UCLA project scientist in Butte’s lab; Song Li, chancellor’s professor and chair of bioengineering at the UCLA Samueli School of Engineering; Louis Bouchard, UCLA associate professor of chemistry and biochemistry; and Sundeep Keswani of Texas Children’s Hospital in Houston.

The study was supported by the National Institutes of Health, Symphony Biosciences, a SciFounder Fellowship and the Ali Jassim Family Cancer Research Fund at UCLA’s Jonsson Comprehensive Cancer Center. Imaging for the study was performed at the CNSI’s Advanced Light Microscopy and Spectroscopy laboratory and the UCLA Crump Institute for Molecular Imaging.