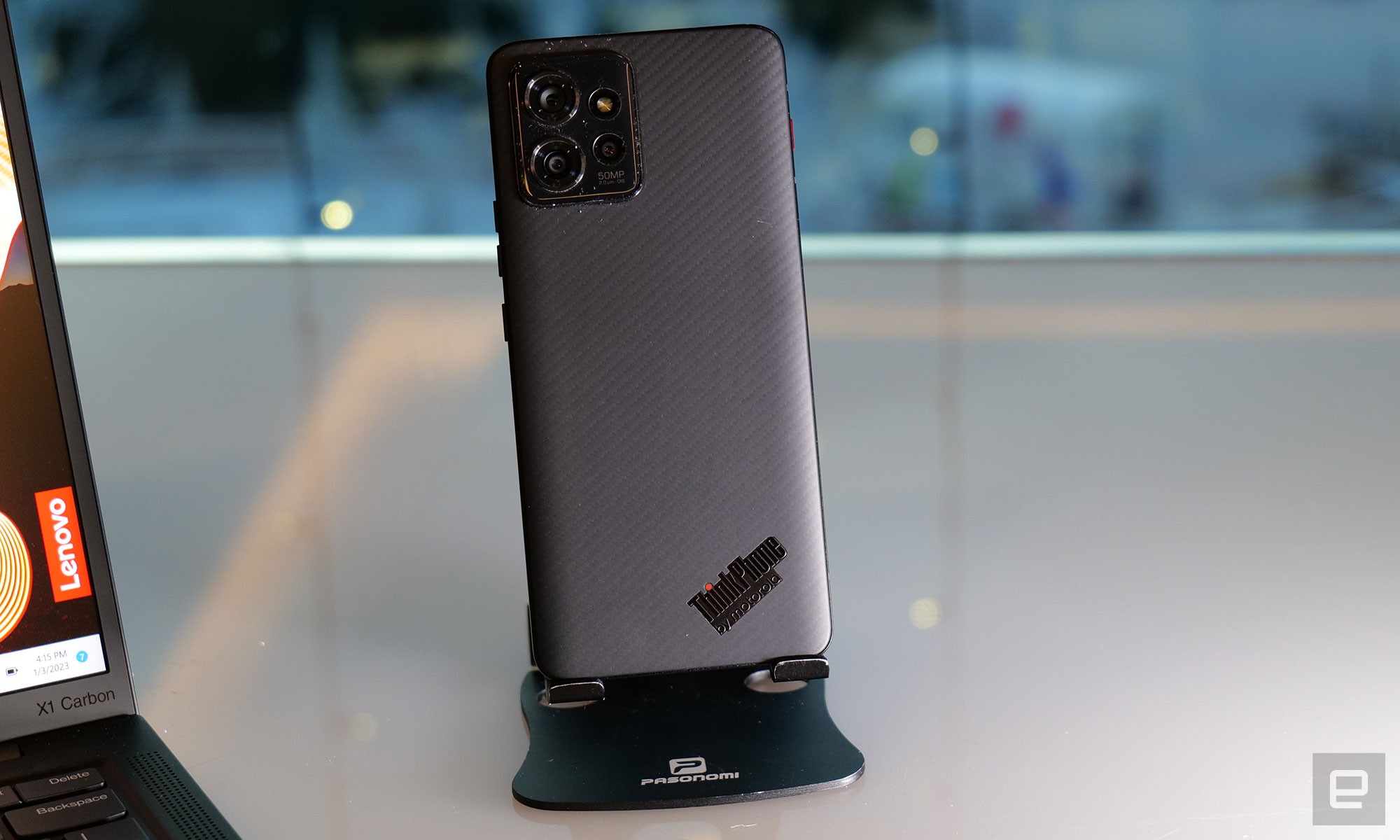 While Lenovo has been a huge force in the enterprise laptop space thanks to its long line of ThinkPads and ThinkBooksMotorola is now hoping to leverage its parent company’s expertise by bringing some of Lenovo’s best features over to its newest mobile device: the ThinkPhone by Motorola.

At first glance, Motorola nailed the ThinkPhone’s basic design. It sports a relatively stealthy appearance featuring aramid fiber in back (and you can still see the weave like on ThinkPads), aircraft-grade aluminum around the sides and a screen made from Gorilla Glass Victus in front. But more importantly, Motorola claims the phone is MIL-STD 810H-certified, which means it’s built to withstand drops of up to 1.25 meters and other environmental stresses. And like all good handsets these days, the ThinkPhone also features an IP68 rating for dust and water resistance including submersions of up to five feet for 30 minutes. So that’s the durability side of things covered relatively thoroughly.

To ensure the ThinkPhone delivers top-notch security, Motorola is including its ThinkShield platform which supports a range of threat detection services and IT features such as easy-to-use mobile device management (MDM) and zero-touch enrollment. But for me, after complaining numerous times about lackluster software support on its consumer phones, I really like that Motorola is committing to at least four years of regular security updates and three major OS upgrades for the ThinkPhone (the device will come with Android 13 out of the box). Granted, this is still a bit short of what Samsung and Google offer on Galaxy S and Pixel phones, but it’s a nice improvement and anything short of this would probably be a dealbreaker in the enterprise space.

However, where things get interesting is the way the ThinkPhone works when paired with one of Lenovo’s business laptops. Using what Motorola is calling Think to Think connectivity, you can sync the handset with a nearby ThinkPad, allowing you to wirelessly share files, mirror your phone’s screen on your notebook, copy-paste text and photos and more. And if you’re the type of person who always wants to look their best during video calls (like my colleague Cherlynn Low), you can even use the ThinkPhone’s camera (both front and back) as a webcam instead of the lower-res sensor that’s probably built into your laptop.

Because the ThinkPhone supports Motorola’s Ready For platform, you can also use the handset as a portable desktop in a pinch by connecting it to an external display, keyboard and mouse. All told, it’s a nice bit of synergy between Moto and its parent company, although I do wonder why it took so long for the two to finally work together. Remember, Lenovo bought Motorola from Google way back in 2014.

Another nice nod to the ThinkPad line is the red button on the side of the phone, which can be programmed by IT personnel to open a specific piece of company software or to launch a specific app by the user. On top of that, you can double tap the red key to open a menu with shortcuts to features like the advanced webcam function or app streaming. Thanks to a partnership with Microsoft, the ThinkPhone will also come pre-loaded with Office 365 (including a free one-month trial). And in the future, there will even be a push-to-talk feature built directly into Teams, so you can send audio messages with a single tap.

As for general specs, the ThinkPhone looks pretty solid, although there isn’t really anything that stands out. It features a 6.6-inch OLED display with a Snapdragon 8+ Gen 1 chip, 8GB or 12GB of RAM and up to 512GB of storage. The phone also supports dual sims, but unfortunately there is no option for expandable storage via microSD. The front-facing selfie cam uses a high-res 32MP sensor while the dual shooters in back are comprised of a 50MP main cam and a 13MP ultrawide lens. I’m a bit disappointed to see that Motorola didn’t include a zoom lens or even a dedicated macro cam, but considering this phone is meant for business, I can see why those were left off.

That said, I do like that Motorola included a sizable 5,000 mAh battery and support for 68-watt fast charging (not to mention an included power brick). Not only does this mean you can add hours worth of juice in just a few minutes, Moto’s power adapter is also beefy enough to charge most ultraportable laptops that support USB-PD, so it can pull double duty in a pinch.

However, the big challenge for the ThinkPhone is that with devices from Samsung and Apple being by far the most popular when it comes to enterprise handsets, it could be difficult for Motorola to break in, even with support from Lenovo. Moto has yet to reveal detailed pricing for the ThinkPhone, although it’s slated to become available in the US, Europe, Latin America, the Middle East, Australia and parts of Asia sometime in the “coming months.”

All products recommended by Engadget are selected by our editorial team, independent of our parent company. Some of our stories include affiliate links. If you buy something through one of these links, we may earn an affiliate commission. All prices are correct at the time of publication.