The 10 weirdest things agents found at airport security in 2022, according to TSA 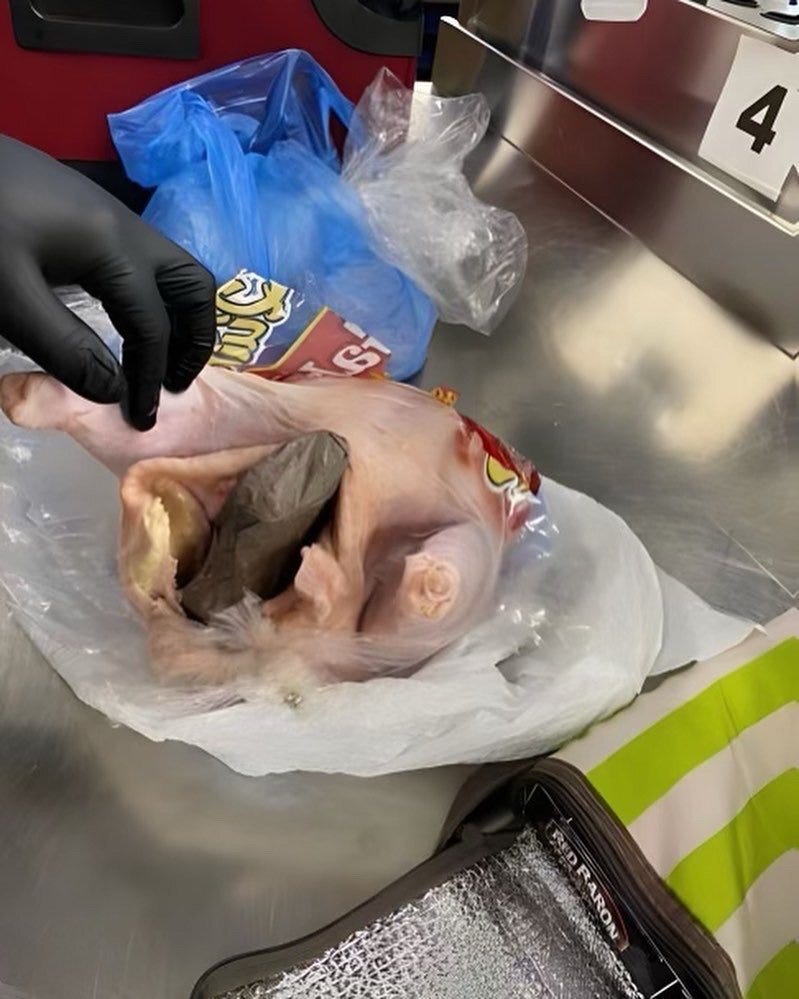 The Transportation Security Administration agency’s recently released list of the “Top 10 Catches of 2022” at US airports serves as an important reminder to double-check your crutches, raw chickens and peanut butter jars for drugs, grenades or guns before heading through airport security.

Passengers are not allowed to bring weapons of any kind, including replicas, into the cabin of a commercial plane – but firearms with the proper permits and packaging can be transported, according to TSA.

Three cattle prods stuffed inside a passenger’s carry-on guitar case were found on Sept. 14 at Dulles International Airport. The passenger was allowed to repack them into a checked bag, a TSA spokesperson said at the time.

7. Gun in the PlayStation

A handgun hidden inside a gutted PlayStation console was discovered by TSA agents at Hartsfield-Jackson Atlanta International Airport on Dec. 14.

Officer Theodosia White said she flagged the PlayStation after it went through an X-ray and did not show a mass of computer parts.

Drugs hidden inside hair scrunchies were found at Boise Airport, according to a video from TSA. When the drugs were found was not immediately known.

A double-bladed knife hidden inside the casing of a laptop was discovered on Nov. 15 at Richmond International Airport in Virginia.

“Detecting artfully concealed weapons points to the training and skill of our officers who are focused on their mission to ensure that prohibited items that could cause harm are not carried onto flights,” said TSA Federal Security Director Robin Burke.

In September, a man alleged that he forgot to remove a loaded 9mm handgun from a medical sling before going through security at Frederick Douglass Greater Rochester International Airport.

More: NASA’s new asteroid-hunting telescope is made to protect Earth from disaster

Officers found disassembled parts of a handgun wrapped in plastic and a magazine loaded with ammo inside jars of peanut butter at John F. Kennedy International Airport on Dec. 22.

2. Gun inside of chicken

On Nov. 7, TSA agents experienced an unpleasantly early Thanksgiving feast when they discovered a handgun stuffed inside a raw whole chicken at Fort Lauderdale-Hollywood International Airport.

TSA officers confiscated about 12,000 fentanyl pills from a suspect who had allegedly hidden them inside candy boxes and bags while going through the Los Angelas International Airport, according to the LA Sheriff’s Department.

What’s everyone talking about? Sign up for our trending newsletter to get the latest news of the day

This article originally appeared on USA TODAY: The 10 weirdest things TSA found in people’s suitcases in 2022