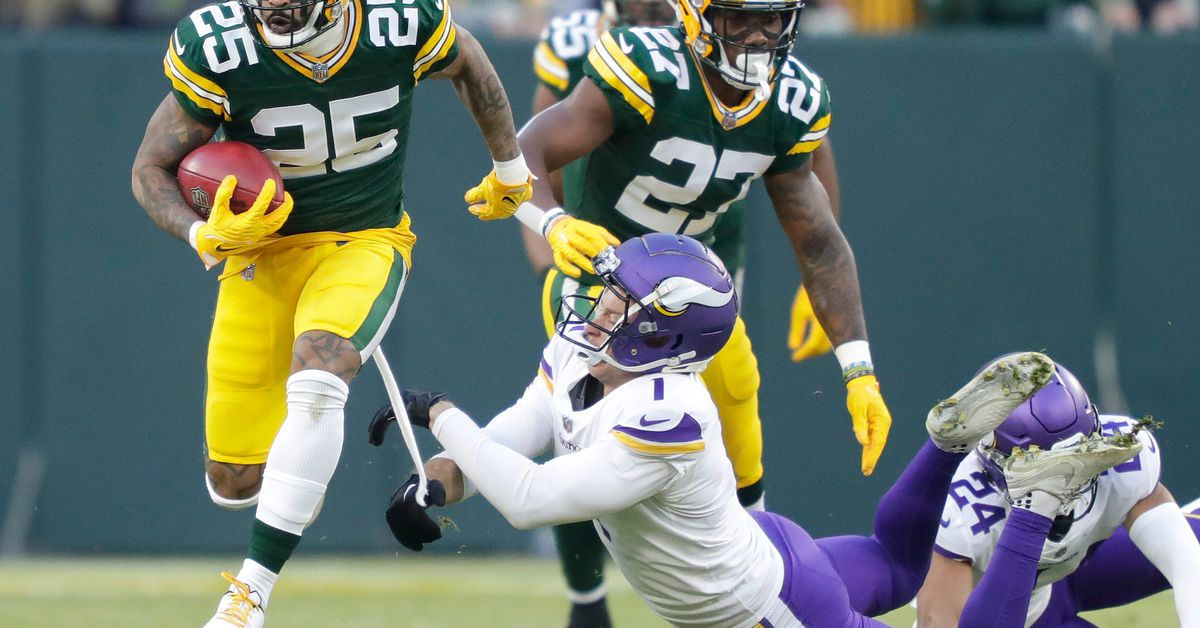 Hello, Daily Norseman! This is kind of a sad game to cover to start my time here, but it’s still football. I’m thankful to be a part of the DN crew, and excited to share my writing with you all. Let me know in the comments what you think!

That game was not fun to watch. Not only did we get dismantled, we got dismantled by the rival Packers, who were all but counted out of the postseason a month ago, in a game that had major playoff implications for both teams. The stock market definitely took a sharp downturn towards an economic recession, but there’s still time for us Minnesota Vikings to turn it around and flourish in the playoffs.

If you’re not familiar with the Stock Market Report, it’s basically an assessment of how specific players performed in this week’s game. Blue chip stocks are players that played very well and are good players to “invest” in. Solid investments are players that may not have had a showstopping performance but still had a positive impact on the game. Junk bonds are players that had disappointing performances, and are not good “investments”. The buy/sell section has items from the game that I would buy into, and items that I would rather not buy into (sell). I’m hoping to get these articles published quickly after each game, so it can be more of an initial reaction. (I was delayed this week because of training and whatnot.) Got it? Good! This week’s Stock Market Report follows.

KJ Osborn – Much like in the Colts game, it seemed like KJ was the only receiver getting open for a good chunk of the game. A lot of that can be credited to the Packers doubling Jefferson and scheming and whatever, but KJ still had a solid outing. If he keeps it up, he might surpass Thielen, who had a rough day, for the WR2 spot.

Jalen Nailor – He had his first career touchdown and 89 yards on three catches. I don’t care if it was in garbage time and the Packers were playing soft, Nailor made plays, which is more than most of the other players on the roster can say about Sunday’s game.

TJ Hockenson – TJ continues to prove that he was a good acquisition. He did have a drop on a tough over-the-shoulder catch attempt, but he still caught seven other balls. I’d expect him to have an impact in the playoffs, should the offense choose to show up to The Dance.

Josh Metellus – The special teamer blocked a punt for the second time in as many games, but got beat on a Tonyan TD. He’s a big part of a special teams unit that has been solid in all of our wins this season.

Duke Shelley – It seems like Duke Shelley has a nice pass breakup every week, and he had another on Sunday. He’s proven to be a solid pickup.

Nick Mullens – Whatever, I’ll take it. 4/4 for 57 yards and a touchdown in garbage time? Better than throwing three picks when the game still means something. He had a really nice toss to Nailor on fourth and 2. Good job, Nick.

Kirk Cousins ​​– Cousins ​​did have a few good plays with his legs, including a scramble to pick up a third and 11, but he was off most of this game, throwing three picks and surrendering a strip-sack. He does this from time to time, where he just seems off for an entire game. I love Kirk and I know he’ll be back to his old gunslingin’ self, but the fact that he has atrocious games at random gives me a little anxiety about the playoffs. But, anxiety is just another part of being a devoted Vikings fan.

Justin Jefferson – I know it’s not all his fault, as Tony Romo so kindly pointed out, but it was still a wimpy performance from the league’s best receiver. Look out in the playoffs.

Greg Joseph – Greg “The Leg” Joseph didn’t show up this week. On a slippery field, The Leg missed two field goals and had one of the saddest attempts at a tackle you’ll ever see on a Packer’s kick return touchdown. This was an unceremonious end to a great string of kicking by The Leg, after making 14 in a row, including a career-long 61-yard walk-off score last week.

The Offensive Line – Yikes. I know we had a third-string center in, but come on. That was just embarrassing. The O-Line was responsible for 5 penalties. This has to be fixed before the playoffs, or we’re not going anywhere.

The Entire Defense – It’s hard to single out just one player after such a disappointing performance. Let me know in the comments who you think deserves the most blame. (And yes, you can say Ed Donatell.)

The defense actually played pretty well in the first quarter, with some solid plays on a three-and-out on the Packers’ opening drive, and a fourth-down stop on their second.

Sell ​​– Vikings’ defense the rest of the game.

The walls crumbled in dramatic fashion after the first quarter. The worst may have been the 10-vs-11 play in the third quarter. We had about 15 seconds to either run another defender on or call a timeout. Embarrassing. There was also the 6-point swing at the end of the first half, where the defense allowed the Packers to move into “bounce-off-the-crossbar” field goal range with 36 seconds left. Crosby misses if we give up literally half a yard less. Yeah, I’m still embarrassed.

JJ had only one catch and seemed quite unhappy all afternoon. Jaire Alexander was talking a big game all week, and unfortunately, he delivered. (Granted, he had a lot of safety help and whatnot, but he still did not allow a reception to Jefferson.) I was waiting all game for Jefferson to finally get going, but it never happened.

Sell ​​– Jefferson needs to get his emotions in check.

I saw quite a few tweets after the game complaining about JJ “assaulting” the referee with his helmet. It clearly wasn’t his intention to hit the ref and, yeah, he probably shouldn’t be throwing his helmet around like that, but he was understandably frustrated with how the game was going at that point. JJ isn’t a hotheaded player or diva receiver (remember Diggs?). He’s just passionate about the game and had a frustrating afternoon. I want nothing more than to meet the Packers in the playoffs and have Jefferson go off for 200 yards. He’ll be back.

Buy – The offensive line is in trouble after losing multiple players to injury.

We got an up close and personal look at how life without Brian O’Neil and a competent center would look like. Similar to how the line crumbled against the Cowboys after Darrisaw went out, the O-line showed us that they have some serious issues past the starting five.

Sell ​​– The season is over because the offensive line is pieced together.

Luckily, Chris Reed, Oli Udoh, and Greg Mancz are still professional athletes, led by a professional coaching staff. There’s no need to hit the panic button yet. Adjustments will be made based on who’s available for the playoffs, and the fanbase shouldn’t go into fire and brimstone mode yet.

Buy – The Packers are cocky jerks.

I watched the game with one of my good friends, who happens to (unfortunately) be a lifelong Packers fan. Even he cringed when Jaire Alexander hit the Griddy over JJ after a pass breakup. I’ve always despised the Packers because of the general cocky attitude of the team, and yesterday’s game solidified that hatred.

Buy – The Vikings allowed them to be cocky jerks, and honestly we deserved to get disrespected because we played like garbage.

The Packers destroyed us. They showed no mercy and disrespected the best receiver in the game. Unfortunately, we deserved it. I’d like to see them in the playoffs. That’s all.

Well, that game was annoying, but it isn’t the end of the season. It never feels good to get stomped on by your greatest opponent, especially when we had a chance to compete for the top seed and a first-round bye. But, there’s still plenty to be excited about with this team, and we’ve proven to be competitive and deadly if we survive to the fourth quarter. So, I’m choosing to take this game as a minor annoyance in an otherwise fantastic and magical season. Let’s keep the morale high and focus on the playoffs, shall we?

There you have it, gang, my first article for The Daily Norseman. Let me know what you think in the comments! Thanks for reading!