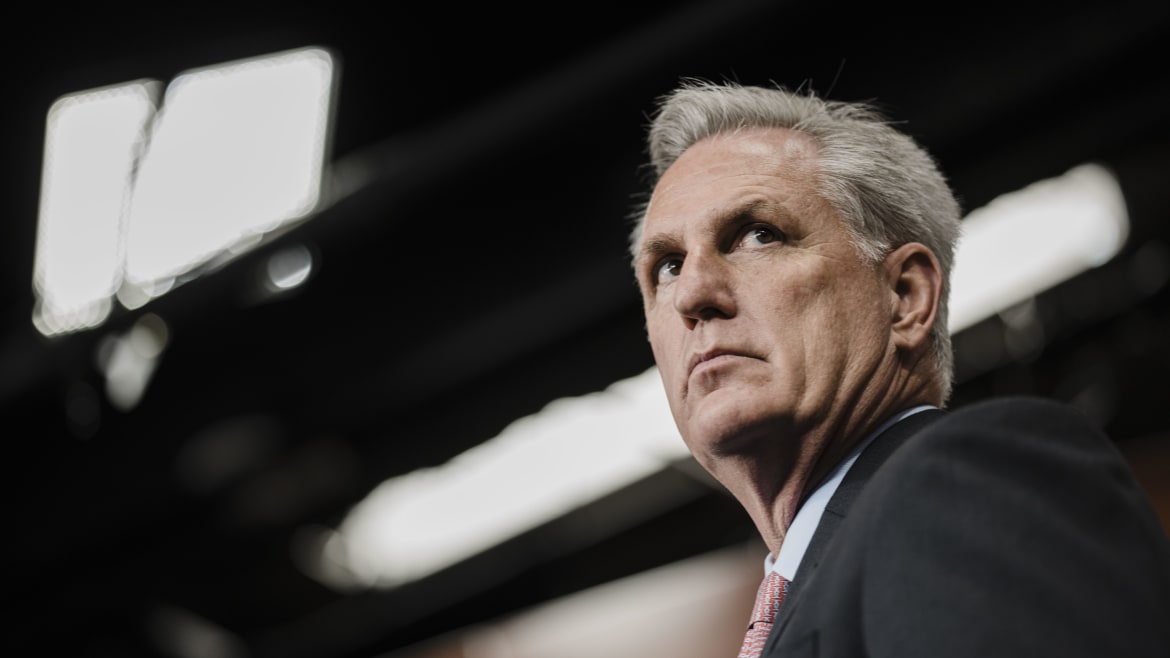 Kevin McCarthy still doesn’t have the votes. And even though there was no real movement either way on a fourth and fifth ballot Wednesday, and even though neither side appeared ready to fold, lawmakers were starting to have the types of conversations that could signal the next step.

For McCarthy, that next step could be towards his collapse.

Unlike the three rounds of voting Tuesday, McCarthy was facing a new leading GOP contender on the fourth ballot: Rep. Byron Donalds (R-FL), who had cast two separate votes for him just 24 hours ago. Donalds ultimately won 20 votes for speaker—his own included—more than enough to deny McCarthy the gavel. On the fifth ballot, the result was exactly the same.

Through Wednesday’s two rounds of voting, McCarthy failed to increase his support. In fact, he continued to lose some, with Rep. Victoria Spartz (R-IN) voting present after voting for the GOP leader the first three times.

After the fourth vote ended, at roughly 1:30 pm, the Republican side of the chamber dissolved into smaller clutches of lawmakers—from both the pro- and anti-McCarthy factions—either talking one-on-one or appearing to argue in big groups.

In between votes, McCarthy’s allies were working the room after it was clear there would be at least another round. Representative Tom Emmer (R-MN), set to be Majority Whip, spent a long time in the aisle of the chamber talking to Donalds, as well as Reps. Bob Good (R-VA) and Lauren Boebert (R-CO).

Meanwhile, Rep.-elect George Santos (R-NY) migrated from where he sat on Tuesday—alone in the back of the chamber—to sitting with conservatives in the center aisle. At one point on Wednesday, he went over to Gaetz and had a prolonged discussion with him.

Gaetz, in turn, had a long conversation with Brian Fitzpatrick (R-PA), one of the most moderate Republicans in the GOP conference, and then Mike Gallagher (R-WI)—one of McCarthy’s greatest allies—spoke with Gaetz at the back of the House chamber.

In short, key players are starting to talk, but it’s unclear where these conversations are headed.

On Wednesday morning, reports flew around the Capitol that McCarthy’s defectors would put forward a new candidate on the fourth ballot, instead of Rep. Jim Jordan (R-OH), who had received votes on the second and third rounds but is backing McCarthy.

When Rep. Chip Roy (R-TX) rose to give another nominating speech, he put forward Donalds, a second-term member and one of only four Black Republicans in the House. Roy was the lone vote for Donald on the first ballot.

Kevin McCarthy Still Doesn’t Have the Votes—and May Never

Murmurs—presumably from confusion, surprise, and a continued sense of schadenfreude—emerged on the Democratic side of the chamber. As Roy pointed out, Donalds’ nomination meant that for the first time in history two Black people would be nominated as Speaker. Democrats and Republicans stood in applause at that fact, including McCarthy and Minority Leader Hakeem Jeffries (D-NY).

On Tuesday, Donalds was the only Republican to defect and vote for Jordan after voting twice for McCarthy. As he cast his vote on the fourth ballot for himself, he stood at the back-center of the chamber. A handful of Republicans rose and cheered. Donalds himself appeared mostly stoic, occasionally looking down at his phone, before later stepping into the Republican cloakroom.

When it was all done, the vote totals for and against McCarthy on the fourth ballot remained nearly the same as the third—with one notable change. Spartz voted present after backing McCarthy the first three times. It was a defection from McCarthy’s camp and a sign that his momentum is going in the wrong direction. But it was also less than the strong sign of movement that McCarthy’s detractors have been seeking.

“We have a constitutional duty to elect the Speaker of the House, but we have to deliberate further as a Republican conference until we have enough votes and stop wasting everyone’s time. None of the Republican candidates have this number yet,” Spartz told reporters after the vote.

In another sign of growing frustration among Republicans, Rep. Ken Buck (R-CO) told reporters in the middle of the fifth vote that McCarthy either needed to gather the necessary support or step aside.

What happens next is unclear. Some of McCarthy’s allies continued to insist on the House floor during votes that the California congressman would be their one and only candidate. Only minutes after the fourth ballot failed, Rep. Warren Davidson (R-OH) stood to nominate McCarthy for a fifth time.

On the fifth ballot, Rep. Lauren Boebert (R-CO) gave the nominating speech for Donalds, at one point turning directly towards McCarthy and stating an increasingly clear truth: “Sir, you do not have the votes, and it’s time to withdraw.”

Read more at The Daily Beast.

Get the Daily Beast’s biggest scoops and scandals delivered right to your inbox. Sign up now.