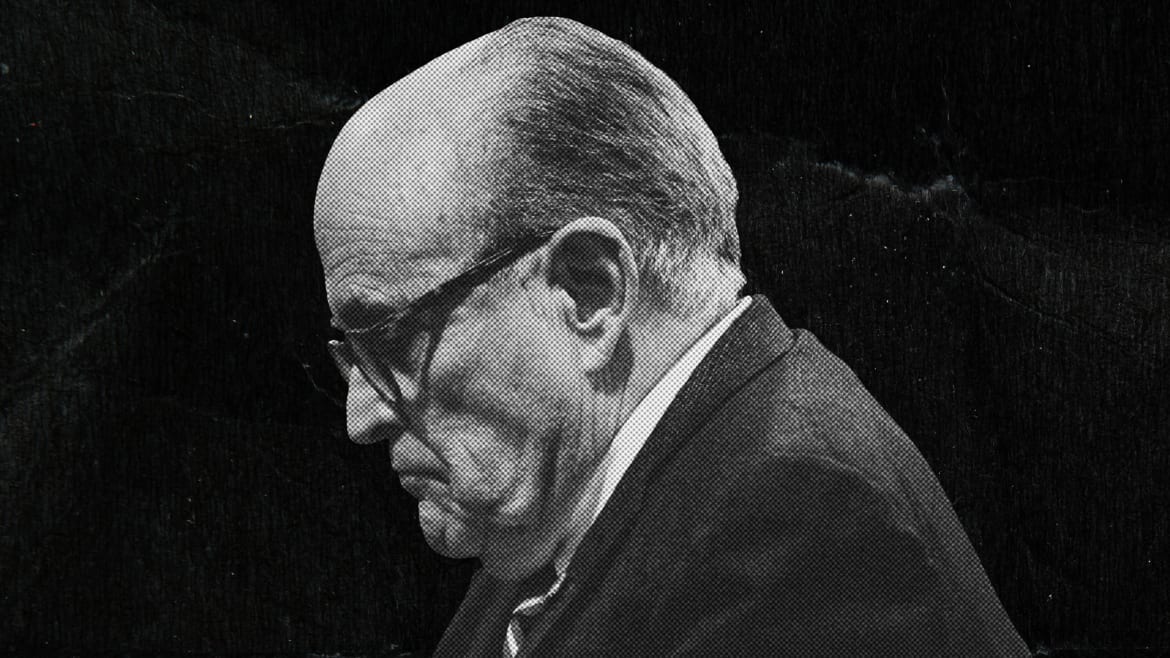 A New York woman who claims she had a romantic relationship with Rudy Giuliani is now suing the former mayor—alleging that he sexually harassed her while she was working under toxic conditions at his company.

She also alleges that Giuliani fired her last year and then warned her to keep quiet, noting his ties to former President Donald Trump. Giuliani’s attorney said he “categorically denies all of the allegations of this frivolous complaint,” but did not comment on whether his client and the woman were romantically entangled.

“Rudolph W. Giuliani, the former US Attorney, once hailed as ‘America’s Mayor,’ is a sexist sexual predator and abuser,” the accuser, Noelle Dunphy, wrote in a summons filed Wednesday in New York Supreme Court.

In the summons, Dunphy states that she was retained for “business development work and other work” by Giuliani and his companies in January 2019. During that time, the 43-year-old alleges, Giuliani made frequent racist and anti-Semitic remarks during “confused and hostile alcohol-laced tirades.” She noted that Giuliani’s alleged “abuse of alcohol” was fueled by his divorce and mounting political and legal controversies.

Dunphy also alleges that Giuliani “sexually harassed” her and demanded sexual favors until she was fired without substantial compensation in 2021. Giuliani allegedly demanded that Dunphy say nothing about her association with him.

“At these times, Giuliani threatened [Dunphy] with further retaliation if she did not remain silent, stating that his private investigators and political connections to President Trump enabled him to retaliate in other ways, express and implied,” Dunphy wrote in the summons.

The summons, which seeks a jury trial and compensatory damages of $3.1 million, is the first step in the civil action against Giuliani, several of his businesses, and 10 John and Jane Does.

Dunphy, who is representing herself, did not explicitly say in the lawsuit that she was romantically involved with Giuliani but she told The Daily Beast she was in a series of text messages and emails.

“It began with Rudy as my boss and lawyer and later turned romantic,” Dunphy wrote, later calling him a “manipulative abuser” to echo her allegations in the summons.

“Seeking justice against a powerful man is terrifying. Even many lawyers are intimidated by Rudy, and by the idea of ​​taking him on,” she wrote. “I can’t be silent any longer.”

“These are libelous allegations drafted by an individual with no lawyer, because no lawyer would associate themselves with this nonsense,” the lawyer added.

“Unfortunately, when you are in the public eye, you become a target for these predators. Any cursory due diligence will reveal that this person is not truthful and any publication of these lies will be purely malicious on the part of your publication.”

In response to Costello’s statement, Dunphy said that her legal filing contains “very specific allegations of non-payment and an unlawfully toxic work environment, all of which are offered in a court filing subject to a penalty of perjury and backed by evidence which will be introduced at trial.”

“His categorical denial is a huge red flag because he knows where there is smoke, there’s fire,” she said. “I have hard evidence to be introduced at trial and look forward to holding him accountable in court. Rudy Giuliani is lashing out because he has nothing else to offer and is afraid that the evidence I have will come before a jury.”

“Rudy is lashing out because he knows what I know and is frightened it is finally coming out” she added.

According to her website, Dunphy is a writer and business development consultant. She previously worked for an ABC News station in Rhode Island before pivoting to her own platform, Great Interviews, where she has spoken with “business leaders and politicians” Among the politicians mentioned on her website is Giuliani.

On what appears to be her personal blog, Dunphy has posted several photos of herself with Giuliani, including the pair smiling at a golf course. Dunphy also appears to have started a Florida nonprofit in 2017 alongside Joshua Maciasa MAGA fanatic convicted of bringing guns near the Philadelphia Convention Center during the 2020 election count. The nonprofit, called the Time Foundation, no longer appears to be active.

Dunphy says in the summons that Giuliani offered to be her attorney pro bono in January 2019 in connection with legal action “surrounding assault and abuse that she suffered as a victim of domestic violence.”

“Giuliani freely offered his legal counsel and expertise, explaining that he wished to help [Dunphy] achieve justice, receive compensation for her physical injuries, and access other remedies available to survivors of violence,” the summons states.

Instead, Dunphy alleges, Giuliani was “frequently intoxicated while discussing matters of law, and he leveraged his counsel to pressure her for sexual quid-pro-quos during lawyer-client consultations.”

The summons notes that ultimately the statute of limitations on her case expired.

“As a result of Giuliani’s legal malpractice, [Dunphy] was re-victimized, re-victimized, retraumatized, left without legal redress, and substantially worse off than before Giuliani agreed to represent her in hopes of securing justice against an abuse,” she wrote. “Instead, Giuliani leveraged the traumatic details of [Dunphy’s] prior victimization to fulfill his morally bankrupt sexual compulsions and fetishes.”

In the summons, Dunphy says that she had almost two decades of business experience before she was retained by Giuliani. She said she routinely reported directly to Giuliani, who “exercised full supervisory control” over her work for him personally and for the company.

Dunphy alleges Giuliani’s businesses maintained a hostile work environment in which employees were accused of “disloyalty” on “a thin-to-nonexistent evidentiary basis.”

“Despite attempting to cultivate a public image of himself as ‘America’s Mayor,’ Giuliani frequently made racist, bigoted, anti-Semitic, anti-LGBTQ, and misogynistic remarks, often during confused and hostile alcohol-laced tirades, further reinforcing the toxicity of the workplace operating under his direction, adding to the chronic and pervasive violations of applicable New York State and New York City laws prohibiting discrimination in the workplace,” the summons states.

The summons also alleges that “on every day of the week, Giuliani would start drinking shortly after awakening and would continue consuming alcohol persistently and in excess, affecting his behavior as her boss and lawyer.”

She alleges that she agreed to deferred compensation and to “be an off-the-books, secret employee.”

But in 2021, after Dunphy said she was subjected to sexual harassment, Giuliani fired her without any legitimate reason “and without issuing the compensation for work already done” or reimbursement for expenses she put on her credit cards.

“At one point, [Dunphy] attempted to find some value in an otherwise-difficult situation by requesting Giuliani’s assistance in finding gainful employment with other organizations with which [Giuliani’s entities] maintained ongoing relationships,” the summons states. “Despite [Dunphy’s] qualifications and satisfactory work, Giuliani refused.

Read more at The Daily Beast.

Got a tip? Send it to The Daily Beast here

Get the Daily Beast’s biggest scoops and scandals delivered right to your inbox. Sign up now.