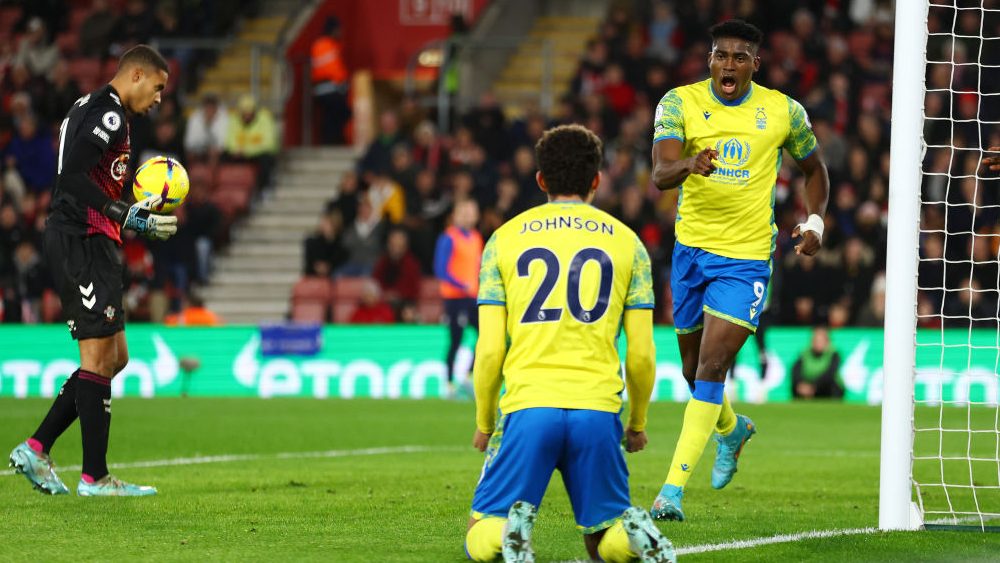 Taiwo Awoniyi’s fourth Premier League goal of the season led Nottingham Forest to a big win and sank Southampton to a new season low following a 1-0 affair at St. Mary’s on Wednesday.

Brennan Johnson drove through the Saints’ back line and fed Awoniyi for a first-half goal and Nathan Jones’ hosts could not find an answer in losing their sixth-straight Premier League match of the season.

Southampton sits dead last in the Premier League with 12 points, last picking up a point in a 1-1 draw with Arsenal on Oct. 23. Saints have only won three times this season, and are 1W-2D-10L since the calendar turned to September.

Forest, meanwhile, continues on its way up the table and sits 15th with 17 points. Steve Cooper’s Tricky Trees have three wins, four draws and two losses since a loss to Wolves on Oct. 15 dropped their record to 1W-2D-7L.

[ MORE: How to watch Premier League in USA ]

Nottingham Forest bought a whole lot of players at the start of the season, and their immediate struggles led some to believe that manager Steve Cooper could be fired for failing to find success.

But perhaps the club leadership knew it would take time for Forest to figure it out and Cooper has rewarded them by finding a good mix of players. If that was the plan all along — patience — then good for them.

The Tricky Trees have now collected 13 points and lost just twice since mid-October as Awoniyi, Renan Lodi, Willy Boly and several other “new faces” have found their way into his system.

Southampton, meanwhile, is in the early days of a big shift of its own. Firing Ralph Hasenhuttl has not led to instant success and manager Nathan Jones clearly needs some January pieces to steady the ship.

James Ward-Prowse and Kyle Walker-Peters were good in the loss, but there have been predictable runs of inconsistency in a team as young as Southampton.

Stars of the Show

Forest visits Blackpool in the third round of the FA Cup on Saturday before hosting Wolves in the League Cup quarterfinal on Wednesday. Leicester City then visits the City Ground on Jan. 14.

Saints are in all three competitions as well. They visit Palace on Saturday morning in the FA Cup, then host Man City in the League Cup four days later before visiting Everton on Jan. 14.

How to watch Southampton vs Nottingham Forest live, stream link and start time

These are desperate times for Southampton and their 10-year stay back in the Premier League looks to be in serious danger. Given that they’ve only won three of their 17 games so far this season, it’s a miracle they’re still within touching distance of safety. Nathan Jones is already under a lot of pressure and they are changing formation and personnel often during games. Saints have to stop conceding silly goals if they’re going to get themselves out of trouble.

Forest look much better after a season of chopping and changing their lineup and Cooper’s side have a real grit and determination about them. They also look very dangerous on the counter and could easily beat Chelsea at home. They now know their best team and the trio of Morgan Gibbs-White, Taiwo Awoniyi and Brennan Johnson in attack are a handful.

In-form players to keep an eye on

James Ward-Prowse has scored in each of these last two games and Southampton’s skipper is doing his best to regain his form and help push them up the table. Teenage winger Samuel Edozie has been excellent and aside from that, Southampton need Romeo Lavia to hit the ground running on his return from injury. They also need Armel Bella-Kotchap and Mohammed Salisu to improve, while the likes of Stuart Armstrong and Romain Perraud could come into the starting lineup.

Forest will need their defensive unit to stay solid as Willy Boly and Joe Worrall have played well together at center back. Ryan Yates has also been excellent in midfield and Gibbs-White links up attack so well with Johnson and Awoniyi providing plenty of threat.

Who knows who will start for Southampton? The big boost is that Romeo Lavia is finally fit. Juan Larios, Theo Walcott and Tino Livramento are all out, while Alex McCarthy is battling back from injury. Samuel Edozie is fit to start.

Chiekhou Kouyate, Moussa Niakhate, Omar Richards, Giulian Biancone and Jesse Lingard are out. It is likely Cooper will stick with the same Forest team which played so well against Chelsea, but Same Surridge, Neco Williams and Jack Colback could come in.