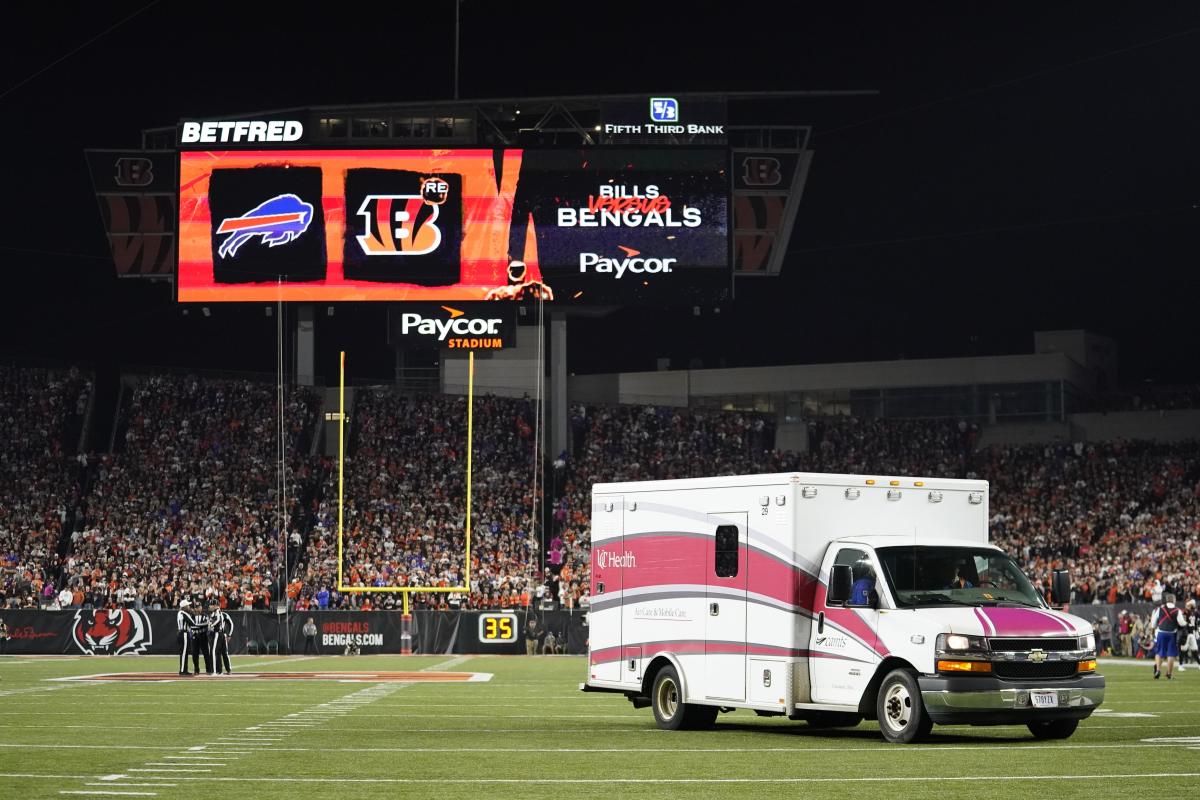 By all accounts, the NFL canvassed players, coaches, union representatives and more.

How did the Buffalo Bills want to proceed, after watching their fellow teammate and player Damar Hamlin suffer cardiac arrest and need on-field resuscitation?

What was the sentiment among the Cincinnati Bengals, who hosted the Bills in Monday night’s game, thereby finding themselves also in proximity to a scary and unprecedented situation?

And most crucially: What was safest and most expedient for Hamlin, who received CPR and defibrillation in a timeline so sudden that University of Cincinnati Medical Center doctors would say the urgency of available care may have made the difference in saving his life?

Considerations swirled. And a football game, which had not even completed the first quarter, seemed to hang in suspension.

At 10:01 pm ET, according to a graphic shown on ESPN’s live broadcast, the game was officially postponed. Players, at this point, were in their locker rooms.

Hamlin had collapsed at 8:55 pm The game was then suspended at 9:18 pm and the ambulance left the stadium at 9:25 pm, according to that same graphic from ESPN, who had camera footage beyond what was aired on live television.

The question, for the 66 minutes between Hamlin’s collapse and the official postponement, reverberated across the internet: Would this game resume? Did anyone involved want it? Did the decision-makers — particularly at the league office, who had ultimate say — want or encourage further game play? Broadcast footage of some players warming up, and play-by-play commentary suggesting a five-minute warm-up period, further fueled speculation.

Thursday afternoon in their first media availability since the incident, the NFL Players Association did little to quiet speculation.

“In times when a leader needs to make a decision, when you take a bunch of time to ask everybody else what their opinion would be, it seems more like you’re searching for the answer you want and not what the right answer actually is ,” NFLPA president JC Tretter said. “We made the determination that it wouldn’t be smart to continue playing the moment we saw what happened and how scary that was.

“Obviously, as we all know, it took a long time for that to actually go into effect.”

“Neither coach, frankly, was talking about resuming play. The players weren’t,” Vincent said, just after midnight ET as Monday night carried into Tuesday morning. “Medical staff, player union, union official, real-time broadcast partners — just trying to make sure we were keeping everyone abreast of what was taking place and what we were thinking prior to the decision being made, at this particular juncture.”

What happened during those 66 minutes? Hamlin, for one, lost a pulse on the field and received immediate CPR that enabled “the return of spontaneous circulation,” University of Cincinnati Medical Center representatives said Thursday.

Bengals head coach Zac Taylor and Bills head coach Sean McDermott communicated with official Shawn Hochuli and each other on the field, followed by Vincent and NFL commissioner Roger Goodell once back in their locker-room areas. NFL chief football administrative officer Dawn Aponte, who was at the game, coordinated dialogue between parties regarding next steps.

NFLPA executive director DeMaurice Smith communicated with Goodell. And Tretter gauged sentiment on continuing the game in conversations with the Bills and Bengals’ union team representatives, as well as NFLPA executive committee members at the game including Bengals safety Michael Thomas, Tretter said.

“It sounds like everybody knew it was a clear no,” Tretter said. “I think there was a lot of checking to see what everyone’s opinion was.”

The NFL disputed that delays stemmed at all from a desire to resume play in what was an unprecedented set of circumstances to navigate. Vincent said that during real-time communication with Goodell, it “never crossed” either of their minds to discuss warming up to return to play.

“That’s ridiculous,” Vincent added. “That’s insensitive. And that’s not a place that we should ever be in.”

Smith and Tretter, nevertheless, criticized the timeline on which a decision was ultimately made.

“I understand the idea that we want to know and want to have feedback and want to have input. But I do think there are certain times when it should be beyond the call of the people involved and there. I think that sometimes, it should just be the decision that it’s best for everybody that the game is cancelled.

“And I made that clear.”

Hamlin woke up Wednesday night, earlier than doctors expected him to, they said. As of Thursday afternoon, he remained in critical condition and relied on intubation to breathe. But he had use of his hands and feet, able to communicate through writing as well as nodding and shaking his head. Medical center representatives said they wanted him to breathe independently and demonstrate “continued neurological and respiratory improvement” before upgrading him to stable condition.