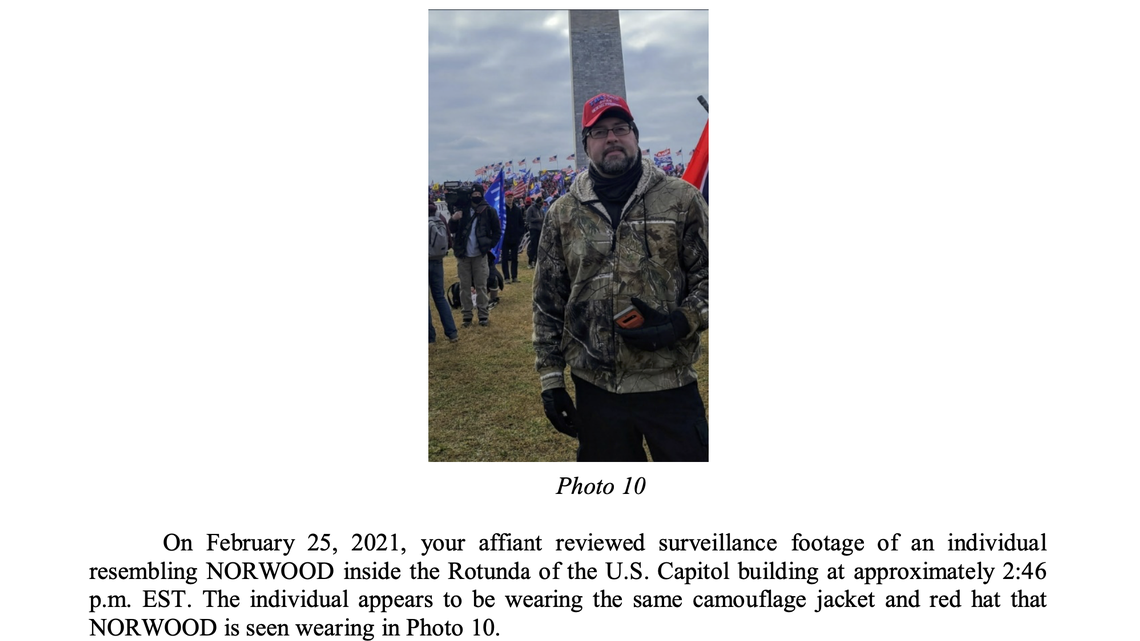 A South Carolina man charged in the Jan. 6 US Capitol riot who was jailed for threatening his estranged wife can be released from pretrial detention but only under strict security conditions, a federal judge decided Wednesday.

After a 26-minute hearing, US Judge Carl Nichols told William “Robbie” Norwood III, 39, of Greer, that he will have to abide by the new constraints or be sent back to jail.

His conditions include no access to phone or internet, no contact with his estranged wife, limited ability to leave his mother’s house and he must allow law enforcement to inspect his electronic devices at any time, the judge said.

“You violate any of the (conditions) I just mentioned …, you will be back where you are now,” Nichols told Norwood, who has been detained since March 2021 in various jails in Georgia and Virginia.

Norwood told the judge he would stick to the conditions.

“I don’t want to speak to my wife again,” he said.

Norwood, a supporter of former President Donald Trump, faces seven charges stemming from his participation in the Jan. 6, 2021, Capitol insurrection, according to a July indictment.

Norwood has agreed to plead guilty to obstructing an official proceeding, but the law governing charging rioters with that offense is now under appeal. Consequently, Norwood’s attorney and prosecutors are waiting to see if that offense holds up before he is allowed to make a formal plea. The sentencing range for that offense is from 23 to 63 months in prison.

On Wednesday, federal prosecutors opposed Norwood’s release from pretrial detention, saying he posed a threat both to his estranged wife and to law enforcement.

“We do not believe there is a set of conditions Mr. Norwood can abide by,” assistant US Attorney Andrew Tessman told the judge.

Government filings in the case say Norwood repeatedly threatened his wife before he was sent to jail, ordering her not to talk to law enforcement or give evidence against him. She had gone with him to Washington on Jan. 6, 2021.

His contacts represent “a malicious campaign of witness tampering in the face of clear court orders prohibiting him from having any contact, directly or indirectly, (with his wife),” a government filing says.

Among the “thousands” of texts that Norwood sent to his wife urging non-cooperation with authorities was one that in all caps called her, in part, a “backstabbing two-faced two-timing narcissistic sociopath.”

Norwood is one of 19 South Carolinians charged so far in the Jan. 6 storming of the Capitol.

At the time, Congress was meeting in a joint session to certify the 2020 election results, declaring now-President Joe Biden the winner. The breach caused lawmakers to flee as enraged rioters stormed the Senate and the House. The breach occurred after a nearby Trump rally, where the former president continued to make unfounded claims of election fraud and “stop the steal.”

One rioter was shot to death in the Capitol and more than 100 police were injured that day.

Evidence again Norwood says that on Jan. 6 he “led a pack of rioters” through the suite of then-House Speaker Nancy Pelosi, continuously uttered curse words as he roamed the Capitol and, at one point, shouted, “What now! This is our house. … Where you at, Nancy?”

Norwood was taking a video of himself as he went, evidence showed.

He also opened doors and allowed “hundreds of rioters to stream into” the Capitol, evidence in the case said.

Norwood, one of the first rioters to enter the Capitol, was taking a video of himself as he went, evidence showed.

After Norwood’s arrest, he was let out on bond and began to threaten his estranged wife, telling her she better not be a witness against him for law enforcement. That contact with his wife specifically violated his condition of release, according to a court filing his case.

More than 950 defendants from nearly every state have been arrested in connection with the storming of the Capitol, a Justice Department release said this week.

Of the 19 defendants from South Carolina, 11 have so far pleaded guilty. Nine have been sentenced, with terms ranging from probation to nearly four years in prison. Charges against the others are pending.