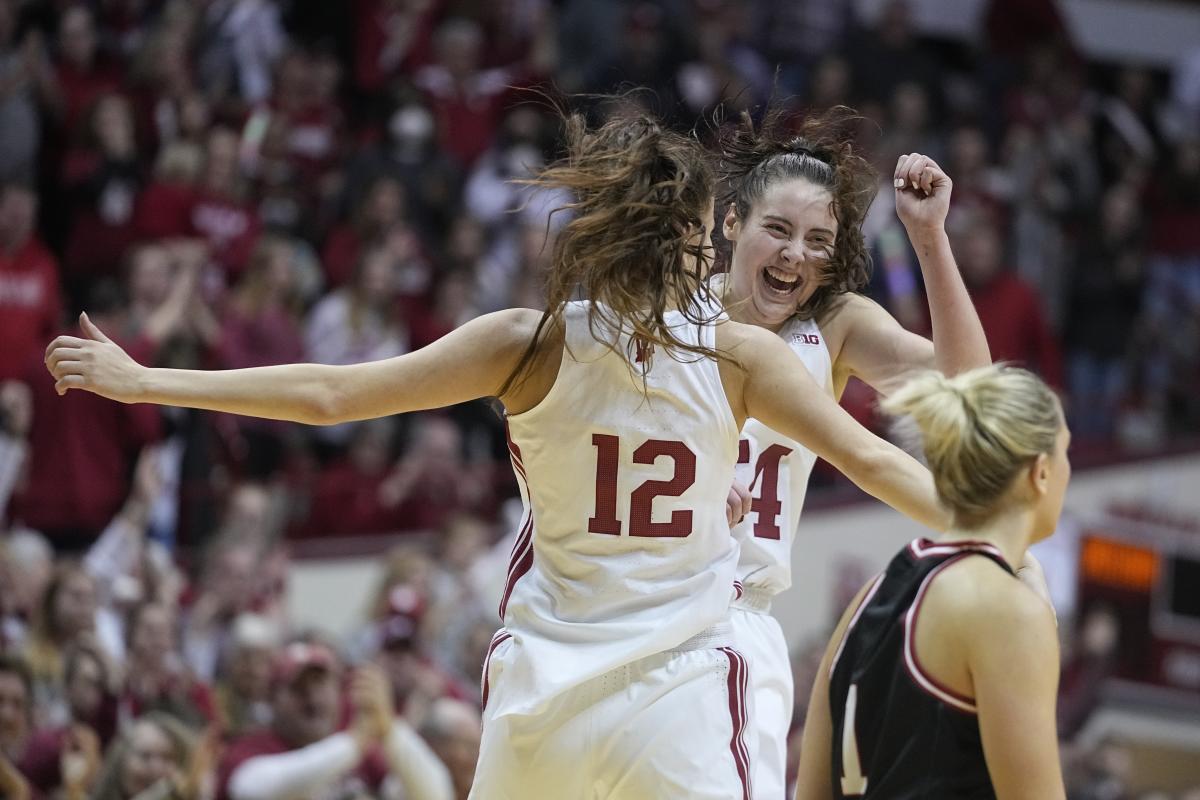 The Big Ten’s philosophy on nonconference scheduling isn’t written down in a binding commitment. No one is telling a team it has to schedule this opponent instead of that one. Instead, the conference details to coaches the importance of schedule strength, works with a scheduling consultant and provides useful metrics on how matchups would impact a team in the eyes of the NCAA tournament selection committee.

The strength of the Big Ten as a result is already showing. There have been six different Big Ten programs that have wins over an Associated Press top-10 opponents this season: Michigan State (over Indiana), Michigan (North Carolina), Maryland (Notre Dame and UConn), Iowa (Iowa State), Indiana (North Carolina) and Ohio State (Tennessee).

They have had five teams in the Associated Press Top 25 poll all nine weeks and more receiving votes. But. 3 Ohio State (15-0) is one of four remaining undefeated teams. It has a Massey Rating strength of schedule ranked 10th, trailing South Carolina (9) in undefeated teams.

“Everyone came into this season picking Iowa as No. 1 [from the Big Ten],” Kahn told Yahoo Sports in December. “And now you have Indiana [and] Ohio State sitting in the top five in the country. That I think points itself to the strength of the league. And we talked about how we knew we were going to have some heavy hitters, but if you look at the bottom of our league, it is only going to help strengthen our league as a whole.”

Kahn, who spoke to Yahoo Sports exactly one year after starting the job, said she’s seen progress in the Big Ten’s rise from being what she called the “best-kept secret in college basketball” to a conference garnering more national attention. That’s intentional through thoughtful game and TV window scheduling.

Kahn and Big Ten leadership get involved on a broader level, rather than nitpicking the choice of an opponent. They share specifically how scheduling certain opponents, and winning or losing those, impacts the team’s overall NCAA Evaluation Tool (NET) rankings, the primary sorting tool used to measure a team’s quality and evaluate their resume. And teams take them up on the advice and metrics on their own level since “everyone’s in a different boat.”

Schools will be able to self-schedule an additional high-profile nonconference game next year since the ACC-Big Ten Challenge ended. Kahn said the conference won’t enter another challenge in the immediate future.

There are eight Big Ten schools in the top 40 of the NET rankings, led by Indiana (sixth), Ohio State (ninth) and Iowa (16). It is one of 14 criteria the committee uses to seed teams. The strength of schedule also goes into account, and the Big Ten leads the nation with the No. 1 strength of schedule among conferences, per Massey Ratings. It bests the ACC by 1.01 points. And it still collectively leads all conferences in scoring (76 ppg), field-goal percentage (45.2%), 3-point percentage (34.8%) and assists (16.8 apg).

They hope to have a solid haul in the tournament bracket with the wins they’ve collectively notched. Nine of the 14 teams are projected to make the tournament field, according to ESPN bracketologist Charlie Creme.

The AP poll is not a tournament criteria, but it lends itself to easy evaluations. The conference has combined for seven wins against top-10 opponents and 12 against ranked non-conference opponents, both of which lead all Division I conferences and are the most in the conference in two decades.

Some things are planned but don’t always work out. Schedules are done 12 to 18 months in advance, Kahn said, and the transfer portal can make it hard to predict a team’s talent that far ahead of time. Issues like what arose for Indiana at the Las Vegas Invitational over Thanksgiving also complicate schedules at the moment. The Hoosiers played in a ballroom with no room for fans, shot clock issues and no EMTs on site.

“They were promised things in a contract that were not at all going to be executed and Indiana got there and was faced with, well if we walk away, how are we going to ever get games back on our schedule?” Kahn told Yahoo Sports. “We’re already working in such a compressed timeline. It put those folks in a really difficult position to have to make that call an hour or two hours before tip time when they start to see things unravel. It’s a very, very difficult position to be in.”

Purdue was among three teams that withdrew from a Las Vegas tournament in the aftermath and instead played Texas A&M last week separately from the event. Kahn said the Big Ten coaches used it as a teachable moment.

“We recently had a coaches call and we talked about [how] there aren’t standards in place for these tournaments,” Kahn said, “so if you are going to enter into a tournament, what are the things that you need to make sure are in place?”

Why you see Big Ten games every night

Ohio State, then ranked No. 14 in the preseason poll after a Sweet 16 berth, opened its season with an 87-75 win over Tennessee, then ranked fifth. It was a Tuesday night in November, the second day of the season, and it drew the second-most viewers for a nonconference women’s basketball game on the Big Ten Network.

“That’s a classic example of it wasn’t necessarily a traditional play day, but them being able to squeeze in a window when they didn’t have a lot of other competition that night generated a huge amount of awareness and national attention,” Kahn said.

Most women’s basketball conferences traditionally play on Thursdays and Sundays, especially when it comes time for conference play in the new year. Kahn said over the past few years, the Big Ten has received buy-in at the campus level for increased exposure and branding opportunities that move away from that structure.

“Some conferences play their traditional play dates,” Kahn said. “The way we have it now to really maximize our media coverage is that those dates can shift.”

Games can shift either way by one day, which means the Big Ten plays every day except Tuesday. But even then, there are a few Tuesday games like Ohio State-Tennessee because there was a TV window for them to shift into. They play on 20 of 31 days in January, compared to the Big 12 (15), SEC (13), ACC (11) and Pac-12 (10). The Big East also has games on 20 days, including a nonconference tilt between UConn and Tennessee as the single game on what’s a nontraditional Thursday for them.

They tipped off 2023 on ESPN with No. 4 Indiana holding off rising Nebraska, 74-62, in overtime on Jan. 1. It’s traditionally a bowl game day, but since it was a Sunday and the NFL is in session, bowl games were pushed to Jan. 2.

“We’re leveraging that day with ESPN2 and putting on a premier matchup,” said Kahn, whose slate of games ended with another rising squad in Illinois defeating No. 12 Iowa, 90-86.

January also features two Saturday afternoon games on FOX, starting with No. 16 Iowa vs. But. 14 Michigan on Jan. 7 and Nebraska vs. Iowa on Jan. 28.

“Fox had some premier windows on a Saturday and they wanted us to select some premier matchups,” Kahn said. “So there’s some opportunities where we’re able to hand-pick some games to fit into the schedule to try to maximize that exposure.”

The “Caitlin Clark factor” is why Iowa has so many premier network TV windows, Kahn said. There are internal standards in place to limit how many times a team can play on a weekday, for example, or how many times a certain team plays on a non-traditional day.

The strength of the Big Ten teams is also why they are being promoted, but the biggest reason might be that Kahn is the first senior executive solely in charge of women’s basketball for the conference. Most employ an executive in charge of men’s basketball while the women’s game was swept into other men’s-led roles and therefore given less attention.

“Now I’m able to do it day-in and day-out and I’m able to really push our TV partners,” Kahn said. “Hey, can we do this, could we do this? Who is our TV talent? Who’s talking about the Big Ten? Are the right people in place that garner that level of respect on the national level?”

It allows Kahn to better educate TV partners on the best games based on opponent, environment and other aspects because she’s invested and giving her attention to it every day, all day.

Two of the top five most-viewed games of the young season involve Big Ten teams, per the conference. The Iowa vs. The UConn matchup at the Phil Knight Legacy in Portland drew the second-largest audience when it aired in the late Sunday afternoon window on ABC on Nov. 27. Maryland’s win against UConn on Dec. 11 was the first Big Ten regular-season game on ABC and ranks fifth in the year’s viewership numbers.

The Big Ten will grow bigger in coming years with USC and UCLA’s move from the Pac-12. Kahn said she is not in active conversations with anyone at those universities while they concentrate on the current seasons, but talk will pick up in the spring. They’re scheduled to join in 2024.

“I would say it’s hit my desk passively that we’re already thinking about scheduling,” Kahn said.

Big Ten coaches are conversing on what it might look like to add USC (NET 42) and UCLA (NET 23), which is currently ranked No. 12 in the AP poll. Scheduling and travel will be a logistical difficulty since the Los Angeles schools are two to three time zones away from the Big Ten. The closest is Nebraska at 1,500 miles. The farthest is Rutgers, a school on the literal opposite coast line.

“Do we want to stay at 18 conference games?” Kahn said of the conversation with coaches. “Does it change the number of conference games we want to play? What does a West Coast swing look like? Are there certain days? Are there travel partners? Anything is on the table at this point that we’re sort of vetting through and I’m vetting through myself or with others involved at the table.”

The addition of UCLA and USC will only add more top-to-bottom pedigree for the Big Ten.