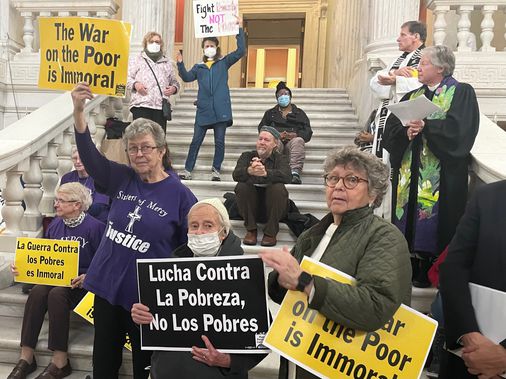 And she noted that 61,000 adults in Rhode Island did not receive needed mental health care last year – nearly one-third because of costs.

So, Swinski said, “Here is the $610 million budget surplus question: How can all these people be best served? What are the 2023 legislative initiatives that will be best for all?”

Swinski delivered the keynote address during the 15th interfaith vigil organized by the Rhode Island Interfaith Coalition to Reduce Poverty.

A weekday briefing from veteran Rhode Island reporters, focused on the things that matter most in the Ocean State.

Faith leaders from across Rhode Island marched from the Gloria Dei Church to the State House. The vigil began with a blast from the shofar, a ram’s horn used for Jewish religious purposes. And it concluded with Rhode Island clergy members reading aloud the names of state officials and legislators, saying, “May they govern with wisdom, care, and compassion.”

Swinski said last year’s legislative session produced “some wonderful legislation,” including the “Cover All Kids” act that provides health care access to all children regardless of immigration status.

She also cited a measure that used $250 million in federal American Rescue Plan Act funding to address housing issues in Rhode Island, including homelessness. “In 2023, we will continue to work for legislation that promotes safe and affordable housing for all,” she said.

Swinski urged people to help advance those priorities by coming to the State House to testify, writing letters, and calling state legislators.

“Today we pray,” she said. “Tomorrow we advocate.”

Lieutenant Governor Sabina Matos, a Democratic former president of the Providence City Council, spoke during the vigil, beginning with a moment of silence for the Rev. Raymond Tetreault, who died on Tuesday. She said she remembered meeting Father Tetreault in Olneyville.

“He was always there, having a strong presence, advocating for the poor, and doing so much for the immigrants here in the state of Rhode Island,” she said.

Matos said Wednesday’s vigil provided a chance to “double down” on the commitment to supporting the “most vulnerable” Rhode Islanders. “I’m glad to be here to say ‘Yes,'” she said. “I’m here with you and in the fight.”

She said she plans to continue focusing on affordable housing and making it accessible to people with disabilities, senior citizens, and multigenerational families.

Also, Matos said she will reintroduce the billcalled the “Fair Chance in Housing Act,” which would limit background and credit score screenings in residential rental applications.

The legislation “will help people have a second chance at housing no matter their past,” she said. “Housing first. Housing is a priority.” While the Assembly did not pass the bill last year, she said, “I am confident we are going to get it through this year.”

After the vigil, Matos said she expects some of the $610 million budget surplus to be spent on housing. When asked about recent criticism from legislative leaders about housing secretary Joshua Saal, who recently failed to submit a critical report with data on the state’s housing crisis, she said: “One thing that I want everybody to know is that we have been under-funding housing for a long time.”

“The problem has been building for quite some time. It is not going to be solved overnight,” she said. “I think (Saal) is building the department, he is in the process of hiring a staff, and I’m expecting that things are going to start moving soon.”