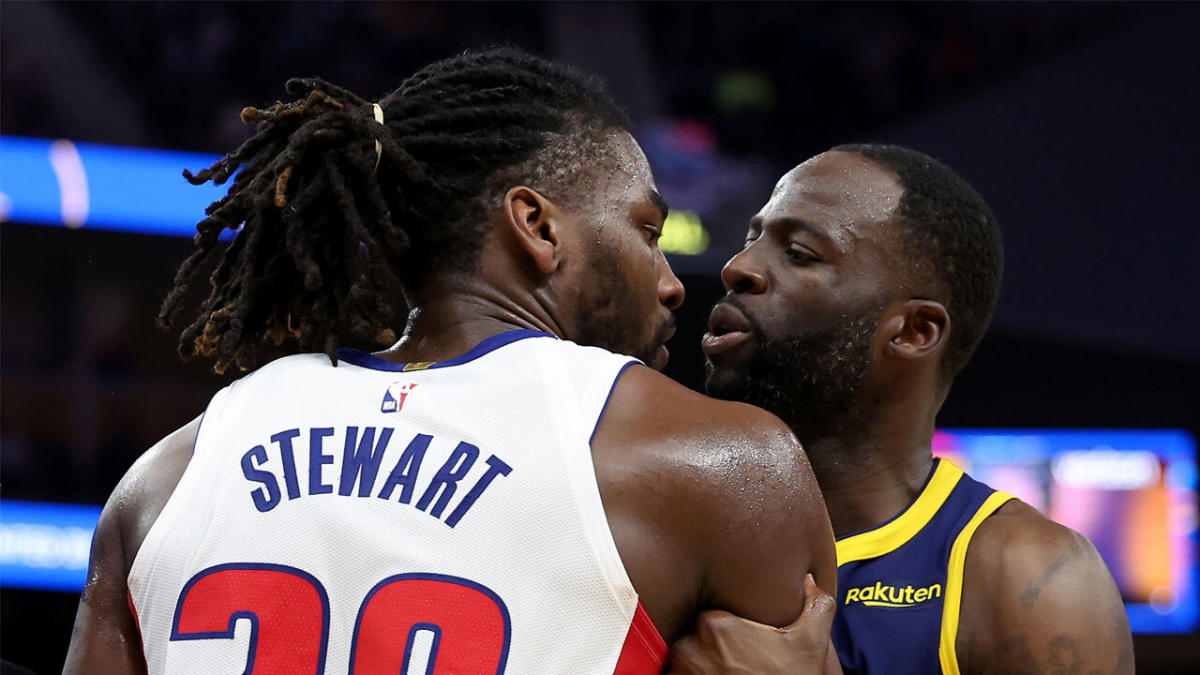 SAN FRANCISCO — Draymond Green sat at his locker and began taking the tape off his ankles minutes after the Warriors had just lost to the Detroit Pistons, 122-119, on a buzzer-beating 3-pointer from Saddiq Bey. Emotions and frustrations were still running high.

Especially for Green, who caught himself in hot water for a situation where he was the one trying to prevail with a calmer head. Unfortunately for him and the Warriors, the referees didn’t see it that way.

With 1:25 remaining in the game and the Warriors down by two points, Bey drilled a big-time three before his eventual game-winner. With the ball in the air, Green boxed out Pistons big man Isaiah Stewart. As it swished through the nets, Green had a hold of Stewart’s jersey, prompting the 21-year-old to push the 32-year-old Warriors veteran.

A shoving match seemed to have ensued. In reality, it was Green holding onto Stewart with the goal of the situation being over and done with. The Warriors called timeout, and when they went to return to the floor they had to do so without their leader.

Green and Stewart each were assessed technical fouls. For Draymond, that put an end to his night after receiving a tech earlier in the second quarter.

“Make a choice, make a decision,” Green said to NBC Sports Bay Area and the Mercury News in the locker room when asked about the double technical fouls on him and Stewart. “Make a decision. The one thing I can guarantee you is that it wasn’t a double tech, so just make a choice. That’s it.”

It’s no secret at this point that Green has a reputation with the refs and all around the NBA. He’s loud, he’s boisterous, he’s opinionated and a lot of the time, he’s right.

He, his coach and his teammates all felt he was in the right this time. His explanation of what he was doing and saying at the moment is a hard one to argue against.

Draymond was determined to de-escalate the situation. One could see his intentions in real time with the way he pulled Stewart in and held onto him. He didn’t want more pushing or shoving, yet he was the one punished.

What makes matters worse for Green and Golden State is that his ejection was also his 12th technical foul of the season. He has played 35 games this season, and there are still 43 regular-season games remaining on the Warriors’ schedule.

After Wednesday night, Green is only four technical fouls away from a one-game suspension. Does that concern him?

Here’s what he had to say when asked about his technical fouls inching closer to the limit.

“There’s nothing I can do about it.”

When Green was forced to watch the rest of the game from the Warriors’ locker room, Steve Kerr couldn’t believe it. Did that really just happen? How did he lose the player, who before the game, he called “the best defender” he has ever seen in a five-point contest with a minute-plus to go?

During his postgame press conference, Kerr’s irritation with the decision was heard and felt.

Timing matters, context matters, knowing the situation matters. To the Warriors, that’s where the refs dropped the ball most.

“In my mind, it’s like, until we have to call a double technical and eject a guy from the game because two guys in a really competitive game, in the most competitive basketball league on earth — oh my, who knew they were actually gonna get a little upset with each other?” Kerr said at the podium. “This is the game. This is what people pay to see — competition at its highest form.

“So to come out of the timeout, we’ve already drawn up our play, Draymond’s on the floor and we’ve got to inbound the ball. And then they tell us Draymond’s been ejected. That’s a tough one. I’ve never experienced that before. I prefer in those situations the officials have the awareness that somebody’s got a T we’re not going to kick him out because two guys got into a little yelling match, or whatever it was.

“If it’s earned, it’s earned. Maybe I’m totally wrong. If I’m wrong then that’s my fault. But I don’t really believe there should be double technicals that lead to an ejection for that.”

Anthony Lamb was one of the main reasons the Warriors had a chance in the end. He scored 17 points in the loss, tied for his most as a Warriors. The Warriors looked tired and played with heavy legs two nights after a double-overtime win, making Lamb’s 14 first-half points that much more important.

Lamb played the final six minutes of Wednesday’s loss, and even hit Klay Thompson for his game-tying 3-pointer in the final seconds. This is Lamb’s first season playing with Green and their lockers are only two apart. He has seen Draymond’s fire and desire, as well as his importance to the Warriors.

From his vantage point, Green was in control at the moment with Stewart and all game long. “He was as calm of Draymond as I’ve seen,” Lamb said. Looking back at the ejection, Lamb stood up for his teammate and toed the fine line that is the NBA.

“I don’t know if I’m allowed to speak on that, but I think that’s a situational thing,” Lamb said. “As a referee staff, knowing Draymond already has one, c’mon. To call a double technical there at the end of the game is really tough for our side. They called it how they called it, and that’s how it is.”

The Warriors didn’t do themselves any favors by falling into an early hole and allowing the Pistons to go on an 8-0 run to end the first quarter. The Pistons made 16 3-pointers and shot 44.4 percent from long range. Coming into the game, they averaged 11.6 threes per game on a 35.3-percent clip. Fouling again was an issue as the Warriors were whistled for 20 fouls — nine more than the Pistons — and Detroit shot 23 free throws. Plus, the Pistons scored 22 points off the Warriors’ 14 turnovers.

Being without your heartbeat and all-time great with a chance to have a six-game winning streak and move multiple spots up the Western Conference standings because of an opinion of the referees hurts. It stings, making an already heartbreaking loss that much harder to swallow.

Now, the Warriors have a chance to regroup and get ready for a date with the Orlando Magic on Saturday night. The bigger concern is knowing how many technical fouls Green has accumulated, and making sure there aren’t any long-term ramifications from such a decision.