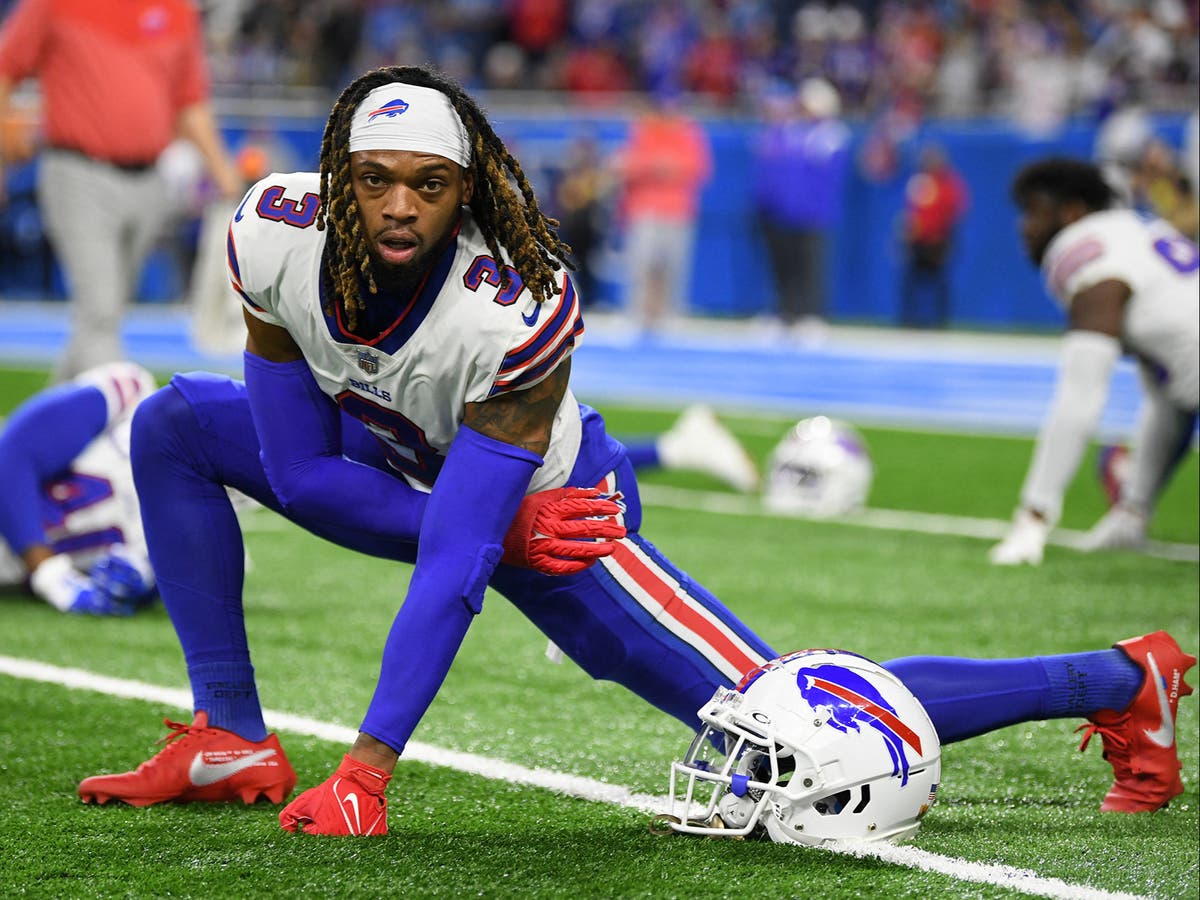 NFL player Damar Hamlin has “shown remarkable improvement” in the past 24 hours and appears to be “neurologically intact” as the Buffalo Bills star continues to make a recovery from an on-field cardiac arrest.

Doctors at the University of Cincinnati Medical Center said the 24-year-old remains “critically ill” in hospital but woke up on Wednesday evening and was able to ask who won the Bills’ game against the Cincinnati Bengals by communicating in writing.

In a press conference on Thursday, Dr. Tim Pritts said: “Last night he was able to emerge, follow commands and even ask who won the game. When we answered Damar when he asked who won the game we said, ‘Yes, you won. You won the game of life.'”

Earlier, Hamlin’s agent, Ronald Butler, told The Associated Press that Hamlin was awake and had been able to grip the hands of family members at his hospital bedside.

A Buffalo Bills statement said: “Per the physicians caring for Damar Hamlin at the University of Cincinnati Medical Center, Damar has shown remarkable improvement over the past 24 hours. While still critically ill, he has demonstrated that he appears to be neurologically intact. His lungs continue to heal and he is making steady progress. We are grateful for the love and support we have received.”

The Tampa Bay Buccaneers quarterback contributed $10,000 to the total, which has now surpassed $7 million and aims to support a toy drive for Hamlin’s community.

Brady has been joined by a number of NFL owners too, with Jim Irsay and the Indianapolis Colts making the highest donation at $25,003.

Many have added $3 to their totals in recognition of Hamlin’s jersey number with the Buffalo Bills.

NFL will not resume Buffalo Bills vs Cincinnati Bengals game

The Bills-Bengals game had major playoff implications for the AFC. Buffalo (12-3) entered Monday night needing a win to maintain the AFC’s No. 1 seed.

The Kansas City Chiefs (13-3) now hold that spot. The Bengals (11-4) had a chance to earn that top seed with two more wins and a loss by the Chiefs.

The scenarios approved by the competition committee include a potential neutral site for the AFC championship game. The league is considering several sites, including indoor and outdoor stadiums.

The resolution being presented to clubs for a vote on Friday follows:

The AFC Championship Game will be played at a neutral site if the participating teams played an unequal number of games and both could have been the No. 1 seed and hosted the game had all AFC clubs play a full 17-game regular season.

Those circumstances involve Buffalo or Cincinnati qualifying for the game as a road team. If Buffalo and Kansas City both win or tie this weekend, a Bills-Chiefs AFC title game would be at a neutral site.

If Buffalo and Kansas City both lose and Baltimore wins or ties, a Bills-Chiefs AFC title game would be at a neutral site.

If Buffalo and Kansas City both lose and Cincinnati wins, Bills or Bengals against Kansas City in the AFC title game would be at a neutral site.

Also, if Baltimore defeats Cincinnati in Week 18, the Ravens would have two wins over the Bengals, a divisional opponent, but will not be able to host a playoff game because Cincinnati will have a higher winning percentage for a 16-game schedule than Baltimore will for a 17-game schedule.

Therefore, if Baltimore defeats Cincinnati and if those two clubs are scheduled to play a wild-card game against each other, the site for that game would be determined by a coin toss.

However, if the Bengals win this weekend or if Baltimore and Cincinnati are not scheduled to play each other in the wild-card round, the game sites would be determined by the regular scheduling procedures.

NFL will not resume Buffalo Bills vs Cincinnati Bengals game

The NFL will not resume the Buffalo Bills and Cincinnati Bengals game that was suspended after Damar Hamlin suffered cardiac arrest and collapsed on the field on Monday night.

The game was brought to a halt when the 24-year-old Bills player was critically injured and had to be resuscitated before being rushed to the hospital where he has been treated ever since.

“This has been a very difficult week,” Commissioner Roger Goodell said in a statement announcing the cancellation, which came on the same day that Hamlin’s doctors said he was awake and communicating with them.

“We continue to focus on the recovery of Damar Hamlin and are encouraged by the improvements in his condition as well as the tremendous outpouring of support and care for Damar and his family from across the country.

“We are also incredibly appreciative of the amazing work of the medical personnel and commend each and every one of them.”

You can see Wolfe’s full report below:

Damar Hamlin’s collapse has prompted a conference call in NFL circles, with NFL insider Ian Rapoport describing it as “emotional”.

The call’s nature included the “preparedness” of each team for situations such as Hamlin’s, the “emergency action plan” was covered, something not made available to the public or seen until Monday’s game between the Bills and Bengals.

Former NFL cornerback and current NFL executive vice president of football operations Troy Vincent was noticeably moved on the call, stating: “The emergency action plan was executed to perfection and gave our brother Damar another day to live”.

Damar Hamlin has “shown remarkable improvement” in the past 24 hours and appears to be “neurologically intact”, the Buffalo Bills have announced, citing physicians caring for the NFL star at the University of Cincinnati Medical Center.

A further update from Hamlin’s teammate Kaiir Elam said the 24-year-old safety was “awake” in hospital.

“Our boy is doing better, awake and showing more signs of improvement,” Elam posted on Twitter. “Thank you God. Keep the prayers coming please. All love 3!”

While Hamlin remains “critically ill” after suffering a cardiac arrest and requiring CPR on the field following a hit against the Cincinnati Bengals on Monday night, a statement from the team said he has “demonstrated that he appears to be neurologically intact”.

The statement added: “His lungs continue to heal and he is making steady progress. We are grateful for the love and support we have received.”

EXPLAINER: What happened to Damar Hamlin, the NFL player who collapsed on the field?

If you’ve missed any of the Damar Hamlin news – here’s our explainer to catch you up.

Andy Gorel: The Damar Hamlin incident is a sobering reminder for us all

The air that had come over Paycor Stadium in Cincinnati was eerie. Players, fans, and coaches alike, from both sides, were completely and utterly disturbed by what they had just seen. Yet somehow, word had gotten out that the NFL had notified the involved parties that play would resume in five minutes.

Shortly thereafter, play was announced as “Temporarily Suspended” until further notice. Meanwhile, an update had made its rounds online that Hamlin was with a pulse, but unable to breathe on his own.

Confusion, devastation, panic – all these emotions visibly plagued the players and coaches, as they remained on the field, pacing back and forth, conversing, even praying in response to what they just saw. On official broadcasts, no word was provided on the injury.

As we as a society dealt with the trauma of watching a perfectly fit and healthy 24-year-old human collapse to the floor, in complete spontaneity, conversation swirled online. From stoking suspicions about vaccine-related conditions to recalling similar episodes of cardiac arrest in pro sports from years pastMonday night’s incident left almost all spectators agreeing on one thing – play should not continue.

Andy Gorel discusses how Monday night’s incident made us feel:

Andrew Buncombe: All of us who watch this brutal – but thrilling – sport are responsible for what befell Damar Hamlin

After 24-year Damar Hamlin of the Buffalo Bills makes the clattering tackle, he quickly gets to his feet. He seems to be fine. But after two steps, he collapses, tumbling to the pitch, unable to move.

We know that medical personnel who rushed on to pitch had to restart the player’s heart, before he was evacuated by ambulance and taken to hospital, as players from both the Bills and the Cincinnati Bengals sat or prayed, utterly distraught.

The young man was said to be in a critical condition at the University of Cincinnati Medical Center, where he has been sedated and is undergoing “further testing and treatment”.

There was a flood of emotional messages of support from fans and players alike, wishing Hamlin a swift recovery, not least from Tee Higgins, the Bengals player he clattered into. “I’m praying that you pull through bro. Love,” he wrote on Twitter.

Andrew Buncombe gives his take on the Damar Hamlin incident: