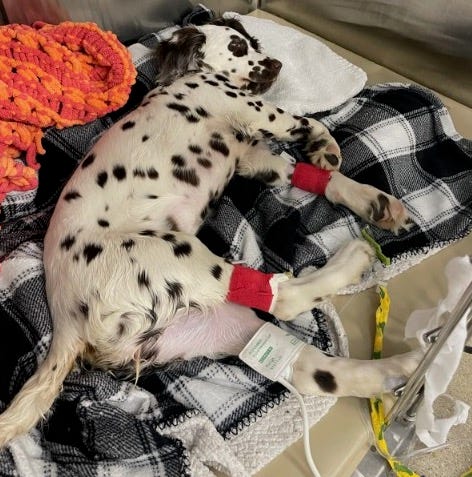 A 13-week-old Dalmatian was in critical but stable condition Wednesday afternoon at a Hagerstown veterinarian after authorities say the puppy received “devastating injuries” at the hands of a Hagerstown man the previous day, according to court records and the Humane Society of Washington County.

Crystal Mowery, field services director for the humane society, said Wednesday that officials are still determining if it’s in the puppy’s “best medical interest” to move forward with surgery on two broken legs or whether she should be euthanized. In addition to head trauma, a front and back leg were broken, she said.

Donations can be made online at https://www.hswcmd.org and designated to help the puppy by putting “animal cruelty” in the notes section, Mowery said.

Michael W. Snyder, 24, a now former resident of Hagerstown, was charged Tuesday with aggravated animal cruelty — a felony punishable by up to three years in prison — and animal cruelty, a misdemeanor, according to Washington County District Court records.

Snyder was originally held without bond at the Washington County Detention Center. During a bond review hearing Wednesday afternoon, visiting Judge W. Timothy Finan ordered Snyder released on recognizance with conditions. Those conditions include staying at his mother’s home south of Frederick, Md., and not being around any animals until the trial.

Dogs that stay, at least periodically at his mother’s home, are to be kept at another family member’s home while Snyder is staying with his mother, according to officials and a woman in the court gallery who addressed the judge.

Details of alleged cruelty to puppy

Hospital staff saw the puppy was unresponsive and immediately took it for emergency treatment.

While diagnostic X-rays were being performed, the puppy went into cardiac arrest, court records state. CPR was performed and the puppy was resuscitated.

Another veterinarian, animal hospital owner and head veterinarian Dr. Shawn Wilson, advised Burgan that the puppy’s injuries were consistent with injuries Wilson has seen with dogs struck by vehicles, court records state. Wilson told Burgan that extreme force would be needed to cause such “devastating injuries.”

There was concern the puppy would not survive the night, court records state.

Mowery said Wednesday afternoon that the puppy responded to stimuli Tuesday night and had started wagging its tail a little.

According to court records, Snyder’s girlfriend told Burgan she got a call from Snyder around 11 am saying their dog was limping after coming inside their Hagerstown home from playing in the yard. When she got home from work around 5:30 pm, she tried to rouse the puppy and the Dalmatian was unresponsive, so she contacted the animal hospital.

The girlfriend told the officer that Snyder admitted on the way to the hospital to hitting the puppy pretty hard, court records state.

Snyder told Burgan the puppy defecated near his son’s play area around 11 a.m., court records state. Snyder “began to discipline the puppy by pushing her nose into the feces and struck her on the rear while doing so. Snyder admitted that he struck the puppy very hard and probably struck the dog too hard,” court records state. Snyder also told the officer he wasn’t trying to be malicious by hitting the dog, only trying to discipline it.

Flores said Snyder was on probation for driving under the influence and was watching the couple’s young child and the puppy on Tuesday.

If Snyder can do such injuries to the puppy, then he’s a danger to the child as well, Flores argued in requesting that Snyder continue to be held without bond.

Assistant Public Defender Regine Lotlikar told Finan that it’s a “stretch” for Flores to say the child — or the woman — is in danger.

The couple’s child is younger than 2 years old, and Snyder has lived with his partner for four years, Lotlikar said.

The girlfriend told the deputy that Snyder was not abusing her, according to court records.

Other than the DUI, Snyder has no other criminal history and has no failures to appear in court, Lotlikar said. He generally works in plumbing, but not now and is receiving unemployment, she said.

Finan agreed with Lotlikar’s request to release Snyder on the condition that he stay with his mother.

At one point there was discussion about Snyder staying with grandparents since there are animals at his mother’s. During that discussion Snyder, who appeared via video from the detention center, told the judge that he was just going to go to his grandparents and “I’m not going to do anything, sir.”

Mowery also addressed the judge, telling him that in her 10 years of overseeing thousands of cases, this case was near the top of the “most egregious” cases she’s seen.

Mowery told Finan she thinks Snyder is a “danger to society” and that the puppy was fighting for its life.

After the hearing, Mowery said the girlfriend surrendered the puppy to the humane society, which will be renaming the puppy.

This article originally appeared on The Herald-Mail: Maryland Dalmatian puppy fighting for its life after abuse