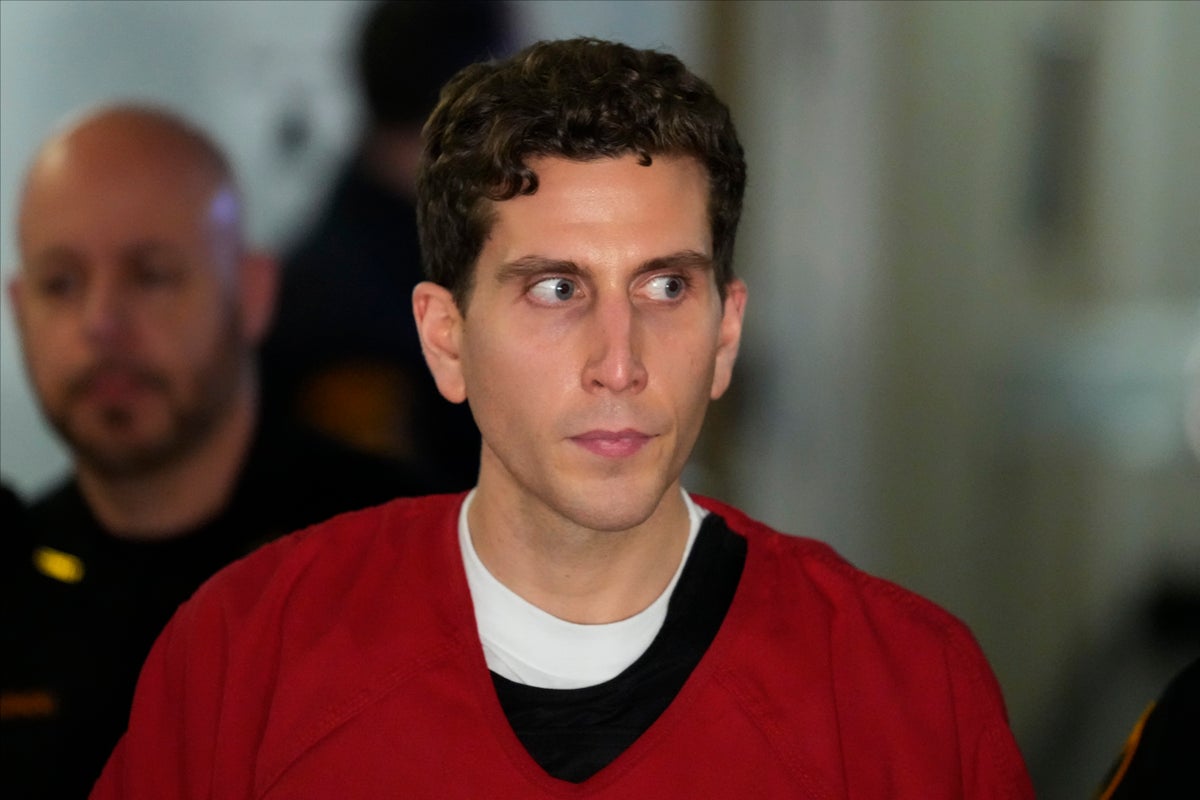 The 28-year-old criminology PhD student landed at Pullman-Moscow Regional Airport on Wednesday evening, hours after being flown out of Monroe County, Pennsylvania, on a state police plane.

He could be seen being led by a large group of officers into a waiting truck.

His arrival comes a day after he waived his extradition rights, paving the way for him to be transported to Idaho to face four charges of first-degree murder and one count of burglary in the November 13 killings.

Mr Kohberger will now be held at the Latah County Jail as he awaits arraignment.

All eyes will be on the yet-to-be-scheduled arraignment, as it is expected to bring with it the release of the probable cause affidavit that led to the arrest.

Mr Kohberger was seen for the first time since his arrest on Tuesday as he appeared shackled and handcuffed at his extradition hearing in the Monroe County Courthouse in Pennsylvania.

He mouthed “I love you” to his tearful family members who were in court to support him before he signed documents agreeing to the extradition request.

The judge ordered him to be returned to Idaho within the next 10 days, giving authorities until Friday January 13 – the two-month anniversary of the murders – to return him to the state.

Pennsylvania officials refused to disclose details about the transfer in a press conference on Tuesday saying that it was up to Moscow Police to arrange but that they hoped it would be “as soon as possible”.

Moscow Police vowed to keep the details of the move under wraps – including the timeline and the method of transportation – due to security concerns surrounding the high-profile prisoner.

Now that Mr Kohberger is back in Idaho, key details about the case are expected to be made public, including what exactly it was that led investigators to suspect the criminology student of carrying out the brutal murders that shocked the small border town of Moscow.

Under Idaho state law, officials are limited about what they can release before a suspect makes their initial court appearance in the state.

The probable cause affidavit is currently sealed and cannot be unsealed until Mr. Kohberger is returned to Idaho and is served with his arrest warrant.

Monroe County First District Attorney Michael Mancuso hinted in the press conference that the affidavit contains damning evidence as he suggested that Mr. Kohberger’s eagerness to learn what information investigators may have was behind his decision to waive his extradition rights.

“I definitely believe one of the reasons he decided to waive his extradition rights was a ‘need to know’ what was in the documents,” Mr. Mancuso said.

Following the extradition hearing, a gag order was issued banning law enforcement from revealing information about the murders and Mr Kohberger’s case.

Latah County Magistrate Judge Megan Marshall made the unusual move to issue a non-dissemination order barring investigators, law enforcement personnel, attorneys, and members of both the prosecution and the defense from sharing any new information about the investigation or the suspect before a verdict is reached at trial.

Under the ruling, authorities can still quote from or refer to “the public record” without making further comment.

Moscow Police Department said in a statement that, due to the order, it will no longer be communicating with the public or the media regarding the case.

The gag order is not expected to impact the release of the probable cause affidavit – a document that will cast light on what evidence investigators have connecting Mr. Kohberger to the slayings.

While details remain under wraps for now, police sources told CNN that the criminal justice student was linked to the savage attack when the white Hyundai Elantra seen near the crime scene was traced back to him.

His DNA was then also matched through genetic geneology techniques to DNA found at the crime scene, the sources said.

Bodycam footage has now been released showing Mr Kohberger and his father being pulled over by police in the Elantra one month on from the murders – before being let go.

The incident unfolded back on December 15 when an Indiana State Police trooper pulled the car over during the father and son’s 2,500-mile journey from Washington state to Pennsylvania.

The footage shows Mr Kohberger’s startled face when an officer pulls the car over and approaches the door.

The officer tells Mr Kohberger – who is driving – and his father that he was trailing too closely behind a truck trailer as he drove.

The conversation is largely unintelligible due to road noise, but Mr. Kohberger’s father is heard telling the officer that his son attends Washington State University and that there had been a shooting there recently.

One day earlier on December 14, a man had barricaded himself in an apartment near WSU and threatened to kill his two roommates before being killed in a shootout with police.

Mr Kohberger’s concern over the shooting at his son’s college indicates his lack of awareness that his son would soon be arrested for a quadruple murder.

The father and son also tell the officer that they have just been pulled over by another trooper. The Hancock County Sheriff’s Office has confirmed it also carried out a stop on the suspect’s car that day.

The Indiana State Trooper told Mr. Kohberger and his father that he was not giving them a ticket or warning but urged them to be “giving yourself plenty of room” on the road.

Indiana State Police said that, at the time of the stop, the trooper had no information linking Mr. Kohberger to the murders in Moscow.

It was sometime during the cross-country journey east that investigators began tracking Mr. Kohberger’s movements.

Since early December, Moscow Police had been searching for a white Hyundai Elantra which was spotted at the crime scene at the time of the murders on November 13.

Mr. Kohberger’s vehicle was seized at the time of his arrest.

On Friday, police swooped in on the Kohberger family home in Chestnuthill Township, Monroe County, and arrested him for the murders.

As a criminal justice PhD student at Washington State University – just across the Idaho-Washington border from Moscow – Mr Kohberger lives just 15 minutes from the King Road home where the murders took place.

In the aftermath of the murders, he had stayed in Pullman, Washington, and continued with his studies for several weeks before setting off on the drive to his home state of Pennsylvania sometime in December so that he could spend the holidays with his family.

Mr Kohberger’s father had traveled to Washington state to meet his son before Christmas – weeks after the violent quadruple homicide – so that they could make the cross-country drive home together.

They arrived at their family home in the Pocono Mountains in mid-December.

An FBI team kept Mr. Kohberger under surveillance in the area for several days before his arrest on Friday (December 30).

No motive has been given for the brutal stabbings and it is unclear what connection – if any – he may have to the four victims.

However, Kaylee Goncalves’ father Steve Goncalves told ABC News that he had found unnamed connections between the suspect and his daughter – but was not ready to reveal what these potential ties were.

The grieving father vowed to face his daughter’s alleged killer in court, saying that he wants Mr. Kohberger to be “sick of seeing us” as he spoke of his determination to win “a battle of wills” against the man accused of stabbing his daughter to death in her bed.

“I want him to be sick of seeing us and sick of knowing that these people won’t let it go,” he told NBC News on Monday.

Mr Kohberger meanwhile plans to fight the accusations, with his Pennsylvania public defender Jason LaBar saying that he was “eager to be exonerated”.

In a statement released on Sunday, Mr. Kohberger’s parents also vowed to stand by their son.

“First and foremost we care deeply for the four families who have lost their precious children. There are no words that can adequately express the sadness we feel, and we pray each day for them,” the family said in a statement.

“We will continue to let the legal process unfold and as a family we will love and support our son and brother.

“We have fully cooperated with law enforcement agencies in an attempt to seek the truth and promote his presumption of innocence rather than judge unknown facts and make erroneous assumptions. We respect privacy in this matter as our family and the families suffering loss can move forward through the legal process.”

Mr. Kohberger moved to Washington to begin the criminology graduate program at Washington State University in August and had just completed his first semester.

Before this, he studied criminology at DeSales University – first as an undergraduate and then finishing his graduate studies in June 2022.

While there, he studied under renowned forensic psychologist Katherine Ramsland who interviewed the BTK serial killer and co-wrote the book Confession of a Serial Killer: The Untold Story of Dennis Rader, the BTK Killer with him.

He also carried out a research project “to understand how emotions and psychological traits influence decision-making when committing a crime”.

He reached out for participants on Reddit, with the chilling survey resurfacing in the wake of his arrest.

“In particular, this study seeks to understand the story behind your most recent criminal offense, with an emphasis on your thoughts and feelings throughout your experience,” the post said.

His arrest marked a huge break in the seven-week-long investigation into the murders which rocked the small college town back on November 13.

The four victims were stabbed to death in their beds with a fixed-blade knife at around 3am or 4am that morning.

Two of the victims were found on the second floor and two on the third floor of the three-storey student rental – a stone’s throw from the University of Idaho campus.

Two surviving roommates slept through the attack in bedrooms on the first floor. The students’ bodies were discovered at around noon.