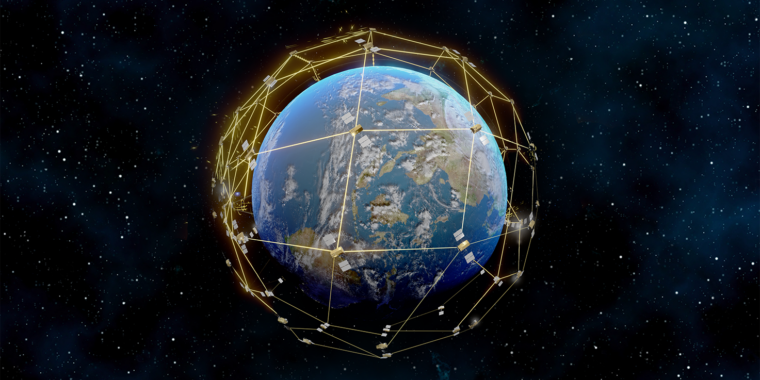 Hey Android users! Are you jealous of the iPhone 14’s ability to connect to satellites? Well, it’s been a few months, and Qualcomm is already getting a similar feature up and running on Android. Meet “Snapdragon Satellite” a way to send satellite messages from a normal-sized Android phone. Unlike on the iPhone, this is real, two-way, SMS-style texting that you’ll supposedly be able to use for more casual conversations instead of the iPhone’s highly compressed, emergency-only, one-way questionnaire system that discourages composing a message.

Qualcomm’s solution will run on the Iridium satellite constellation—this is the 25-year-old, 66-satellite network that powers traditional, purpose-built satellite phones with giant external antennas. Qualcomm says this is now going to work with normal-sized smartphones and with normal, internal-only antennas. Qualcomm’s VP of Product Management, Francesco Grilli, gave a big overview of the service and says “in most cases” you won’t even need a new antenna. Iridium runs in the 1-2 GHz L Bandthe same as GPS and some mid-band cellular service, so your phone already has an antenna for this.

That’s not to say it will work without any new hardware, but Qualcomm will build it into its standard RF loadout without requiring any major new components. This is a great situation compared to mmWave 5Gwhich added a big, extra, expensive antenna to your phone that very few people can use.

Just like with the iPhone, skipping out on the normal big, external antenna means dealing with a specific set of compromises. Unlike an always-on cellular connection, you’ll fire up some targeting app and might be asked to point your phone at a location in the sky and wait for a connection. Voice calls, which are possible on Iridium with a traditional satellite phone, are out, and this is data-only. The connection uses the Iridium protocol, just like a real satellite phone. Grilli describes the communication as “closer you 2G [GSM or EDGE] than you 5G.” It’s an old-school TDMA (time-division multiple access) setup, where any one user talking to a specific antenna will monopolize that connection spectrum, and everyone else has to wait. (Keep in mind this “waiting” is an order of milliseconds, and satellites have multiple antennas.) FDMA (frequency division multiple access) is how all your other phone wireless technologies work. FDMA allows for higher-bandwidth and multiple simultaneous users, but that’s difficult when you’re talking about outer space communications.

Qualcomm’s performance promises here seem good compared to Apple’s solution. Grilli says you’ll be able to send a “full-size SMS in less than 10 seconds, and on average, it takes three seconds.” That’s faster than the iPhone’s 15 seconds for an emergency SOS, which is a highly compressed questionnaire message and not a full SMS. The iPhone is on a different Globalstar constellation with different characteristics. That Globalstar constellation has only 24 satellites covering the world, which is not good enough for continuous 24/7 coverage. These satellites are moving around, so there’s a regular up-and-down cadence to the Globalstar service that lasts for minutes at a time for any given location. With 66 satellites in the Iridium constellation, you should always have service, and you might not even need to do that “hold your phone up” dance to get a connection.

Presumably, you’ll have to pay someone to access the satellite network. Qualcomm is a chip provider and didn’t want to get into ISP or messaging app details. Texts to 911 (or your local equivalent) will be free, without any kind of plan, just like how cellular works (this is a law). If you’re paying for a premium plan, Qualcomm’s proprietary setup allows for whatever messaging standard you want to use, either bog-standard SMS with your normal phone number or some over-the-top service (ie, WhatsApp), but operators will need to figure that out. Some existing standards would be great since only one person would need to pay for the satellite service and could talk to the outside world.

Qualcomm says the service will be available in phones in the second half of the year for phones launched in North America and Europe. Hardware support technically starts in the Qualcomm Snapdragon Gen 2 SoC, which already has a few announced devices, but it sounds like satellite compatibility will be an add-on feature manufacturers need to plan for. The company says several partners are already working on designs. While the feature is exclusive to flagship devices, for now, Qualcomm says new, cheaper chips might also incorporate the feature, depending on what the customer reception is like. It’s also interested in bringing the feature to cars.