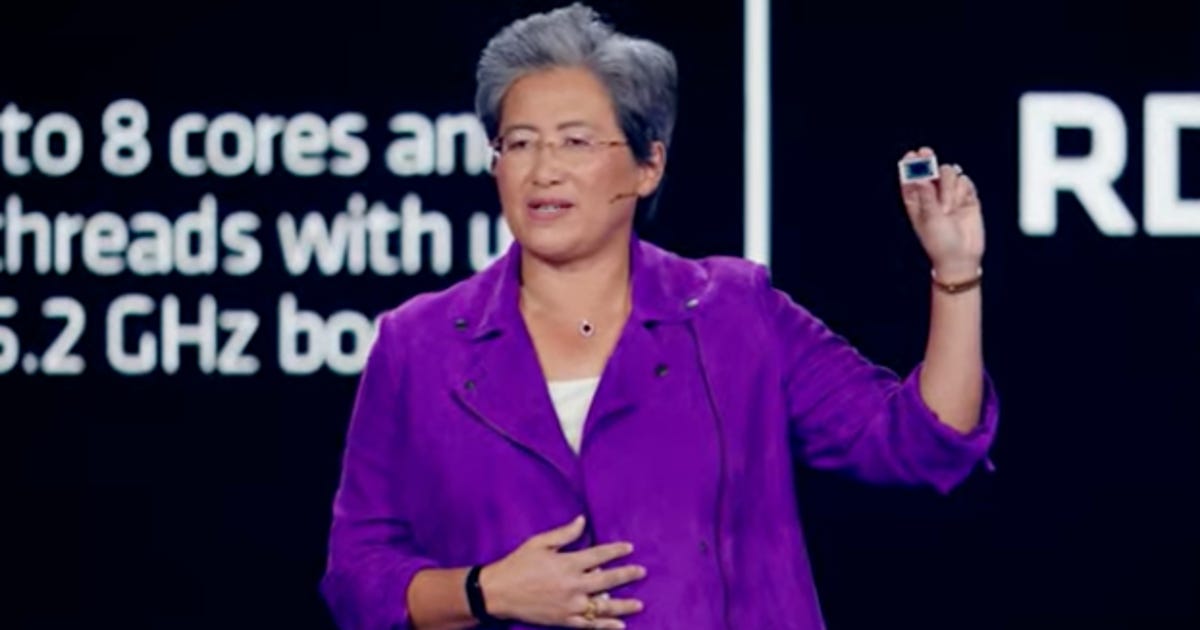 AMD CEO Lisa Su kicked off CES with a keynote discussing AMD’s chip announcements, from the Ryzen 7000 series of mobile CPUs to its RX 7000 series mobile GPUs to the high-powered X3D class of desktop GPUs. Some key themes were the growing role of AI in everyday computing (as well as in traditional roles) and the impact (and needs) of hybrid work.

Su also touted some of the more commercial aspects of its partners’ products, such as a fairly detailed discussions of the role of robotics and Magic Leap’s AR in health care (the latter just earned 60601 certification). We were treated to an astronaut talking about research and AMD’s adaptive computing such as in the Perseverance Mars Rover and in simulating (wo)manned missions to the moon. AMD’s not just in your console: It’s in space.

She wrapped up by discussing sustainability in its components and technologies and how it translates to large scale data centers and high-performance computing. She also launched the AMD Instinct MI300, a GPU/CPU combo designed for data center-scale AI training and services. It’s coming in the latter half of this year.

Note that some of this is drawn from separate briefing materials in addition to what zipped by during the keynote. You can follow more CES news on our live blogand as well as more detail about the partner commercial announcements.

AMD lightly unveiled its XDNA architecture for accelerating AI inferencing, which can scale up or down depending on how many processing units the hardware developer throws at it. (It comes from the company’s acquisition of Xilinx.) Hence the “Adaptive AI” branding. Because it can pass data from array to array without needing to communicate with external memory or a CPU or GPU, AMD says it decreases latency and makes it a flexible architecture.

All that is preface to the debut of the company’s new generation of HS mobile CPUs, which includes a small integrated Adaptive AI accelerator that can handle up to four simultaneous AI streams, either for separate tasks or performing a single task with parallel threads. It’s optimized for power efficiency, and because it frees up CPU and GPU cycles that the AI ​​processing would otherwise take, AMD claims it results in less performance degradation and better battery life.

AI algorithms pervade computing these days, and mobile devices are increasingly relying on them for even mundane operations, like cleaning up video during videoconferencing and improving battery-saving behavior. AMD claims that it is up to 50% more efficient than the Apple M2 neural engine. Intel uses a separate chip for AI acceleration, dubbed Movidius, which means its presence in a laptop will depend on individual manufacturers.

The HX are faster, but the HS are more cutting edge

This is a schism I’m not really happy about. Both Intel and AMD use “HX” to designate the CPUs intended for the highest-performance gaming or creative-focused laptops, which tend to be used by people looking for cutting-edge technology (and who are usually willing to pay for it). But the aforementioned Adaptive AI accelerator is only in the Ryzen 9 7940HS, Ryzen 7 7840HS and Ryzen 5 7640HS, the CPUs designed for the slim-but-powerful models, and they also have the advantages of using the 4nm fabrication process, while the HX are still on 5nm (which is partly how they can hit higher clock speeds safely).

A smaller process tends to be more power efficient and faster. HS needs that to hit the 35- to 45-watt power target of that class of laptops, but given how much AI is going into creative applications and games, it would have been nice to be able to get some extra power on the smaller die .

The HS chips also use the more recent RDNA3 architecture for their integrated graphics. It’s not an uncommon practice; the rationale is that the HX class of laptops will use discrete GPUs. But most laptops with discrete GPUs still rely on the integrated version for, say, lower power consumption when the speed of the discrete GPU isn’t necessary.

On the flip side, the HX chips are AMD’s first mobile CPUs using chiplets. And the top Ryzen 9 boasts 16 cores/32 threads.

Gaming laptops announced at the show that takes advantage of all AMD has to offer are the Alienware M16 and M18, Asus TUF Gaming A16 Advantage Edition and a new Lenovo Legion Pro series. The first Ryzen 7040-series laptops will start shipping in March. HP CEO Enrique Lores came onstage to tout the new Dragonfly Pro laptops.

It’s bad enough that it’s yet another year without Thunderbolt support on AMD laptops, but even USB 4 isn’t supported on the lower end of the CPU spectrum where the “mainstream thin and light” chips live. And AMD’s information seems to imply that even the HX models might not have it because the USB 4 controller might be optional.

And that’s a good thing. The 65w class of desktop processors are for low-power, compact or inexpensive PCs, and tend to be popular with upgraders. For this generation, AMD has designed the processors to operate at 65w but be able to draw almost double that via overclocking, which the company claims can deliver a 30%-plus increase in performance. Since a lot of daily computer usage is for mundane tasks — at least if you’re looking at this class of processors — defaulting to the lower power state makes sense.

AMD’s intergenerational powerhouses use the company’s 3D V-Cache architecture to cram more cache onto the die to deliver better performance out of essentially the same CPU. This year, AMD adds a Ryzen 9 7950X3D to the mix — there are also a couple of Ryzen 7s as before, the 7900X3D and 7800X3D. AMD will be bundling Star Wars Jedi: Survivora hotly anticipated game, with the processors.

Maybe it’s just me, but there doesn’t seem anything really remarkable about the RX 7600M, RX 7600M XT, RX 7700S and RX 7600S. They seem like a fine step up over last year’s offerings, but they don’t sound nearly as HX-class worthy as say, the mobile RTX 4090 or RTX 4080. And a lot of the new technologies intended to boost the performance of AMD GPUs in conjunction with the CPUs, like SmartShift Radeon Super Resolution upscaling, FidelityFX Super Resolution 3 (a better class of upscaling) and Hypr-RX mode (one-click frame-rate maximization and latency minimization using all the available settings) aren’t quite here yet. In the first half of this year, sometime, we’re told.