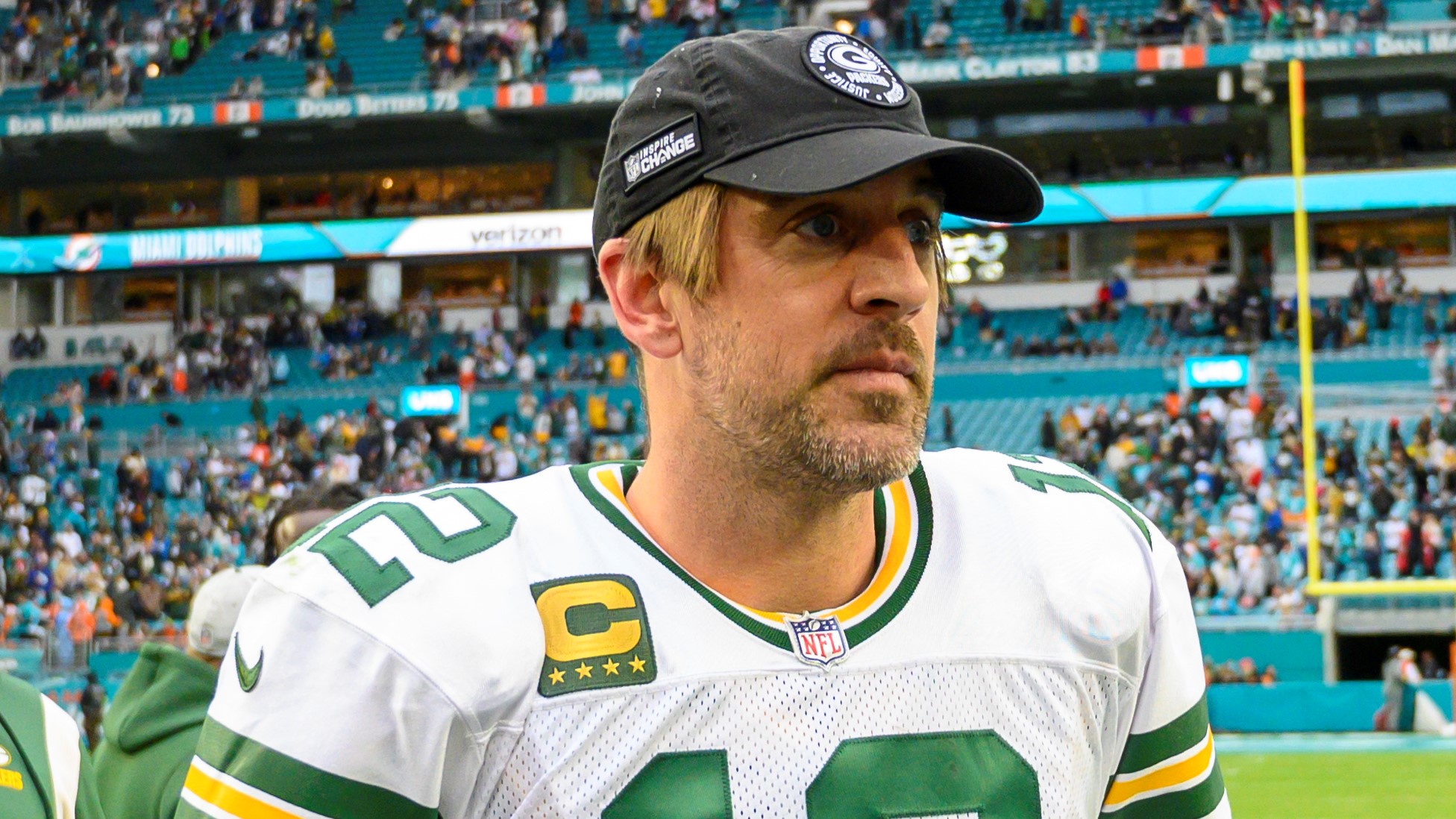 I was so close to being free of Aaron Rodgers. Salt, salt close. There the Packers were at 4-8, with Rodgers being the same joyless asshole he’s been throughout his entire career: making frowny faces after every failed third down attempt, searching downfield in vain for Davante Adams only to find a succession of puds, spending more than that with Pat McAfee than in the film room, and playing the worst football of his career. It was MAGNIFICENT, I tell you. Better than my wedding day. It was the time of my life, and it’s what Rodgers deserved after outing himself a season ago a walking Substack.

He was done. Washed. One more loss and his Packers would be out of the playoffs, without even the opportunity to continue their now-annual tradition of blowing a layup playoff game. He would then spend all offseason doing his whole fake “Hmmm maybe I’ll retire” shtick, and then get traded to Carolina, and then go 0-17, and then end the season in jail for assaulting Jim Harbaugh with a bottle of switchel . Oh, what a demise it would have been. All of that was right there to be had. MINE.

Instead, I got this:

The Packers haven’t lost since November. Once December hit, Packers head coach Matt LaFleur — who looks like a sniveling Frenchman up to no good — said to his team, “Hey, maybe we should have meetings together as an offense instead of trying to hash everything out by bitching to sweaty podcasters.” That was apparently all that a hateful God needed to let Rodgers and the Packers rip off four straight wins, capped with a 41-17 demolition of my team, the Minnesota Vikings, just a few days ago. I’d tell God that he owes me, but I just know he’d end up letting me down anyway. He always does. Least reliable god there is.

I started that Vikings game hoping that my team — NFC North champions, I’ll have you know — would finish Rodgers off for good. Instead, I got treated to three hours of Jim Nantz hosting an episode of “This Is Your Life” with Rodgers as his guest of honor. Even Tony Romo was like, “Can you imagine if these Packers started off 4-8 and made it to the Super Bowl? That’d be amazing!” But, Tony. But, it wouldn’t be amazing. In fact, I think it’d be about the worst goddamn thing that’s ever happened. After everything Aaron Rodgers did to not just me, but to AMERICA, you want me to feel good for him? But, I don’t think I’m gonna do that. I think I’m gonna go drive my car through him instead. Listen to Rodgers smoothly downshift into Moon Worshiper Mode after spending the past 12 months on his Cancel Culture Casket Tour: “I do believe in the power of manifestation and I do believe in momentum and I believe very strongly in the strength of the mind.”

Ah yes, ’twas your incredible mind forces that compelled Mike McCarthy to eschew a game-winning field goal for Mike McCarthy reasons, and the Miami Dolphins to gift-wrap your team three late picks after leaving their concussed QB in for a whole game AGAIN . Really shows you what a little bit of spirituality can do, you know?

I f—king hate this man, and I want to see him burn. Where I once envisioned Rodgers’ sweet, sweet downfall (along with Tom Brady’s!), I am now forced to contemplate him fulfilling every last wet dream that Tony Romo verbalized for him this past Sunday: playoff upsets, gritty touchdown passes to a decaying Randall Cobb, and a ghastly Super Bowl title. The visions… they won’t leave my cruel mind. But one loves boasting about living rent-free in your head more than Rodgers does, and lo and behold he’s found yet another vacancy in my cranium.


That’s where you and I have something in common, 49ers fans. You root for what is the hottest team in the league right now. You have the best defense on the planet when it’s not going up against the immortal Jarrett Stidham. And you have a wonderboy quarterback who’s either the second coming of Tom Brady or the luckiest scrub not named Chase Daniel. You are the stuff of other fans’ nightmares, including mine. But there is an even greater nightmare looming on the horizon, and it’s Rodgers kicking off a redemption tour that no one asked for by beating the Lions on Sunday, meeting you guys in the first round, and detasseling poor Brock Purdy like the stalk of baby corn that he is. I don’t want this. YOU don’t want this.

The end of the regular season is a time for fans to mentally grade their team’s potential playoff opponents from most desirable to least. As formidable as the Niners are currently, I don’t think there’s no question that you guys would rather face Geno Smith or Jared Goff as a two-seed than Aaron Rodgers and his band of America’s Sweethearts. So please, if you will, join me in our own round of manifestation.

To get into the playoffs, Rodgers still has to beat the Lions on Sunday. The Lions may still be the Lions, and they may be coached by Dollar Tree Bill Cowher, but they also possess the fourth highest scoring offense in the league, and they have more than a little magic of their own. Let us join our mind forces together and wish for the Lions to go into Lambeau, cast off the shackles of their own history, and flush Rodgers down a frozen toilet. And if Detroit fails in this task, which feels like cruel destiny at the moment, then I must ask you Bay Area residents to conjure the spirits of Colin Kaepernick, Raheem Mostert and every other player in Niners history who has trucked Rodgers’ title aspirations in years past. Those were some of my favorite moments as a Vikings fan (I know, awkward), and it was all thanks to you. And so I call upon you one more time — not as a friend, but as someone with a common business interest — to help stop this comeback story dead in its tracks.

Because I’ve had it with Rodgers. He deserves a legacy that he’ll forever consider incomplete. He deserves to spend the rest of his career on losing teams, never understanding his culpability in their struggles. And he deserves to be hated. Forever. F—k this guy. Thank you for your time.